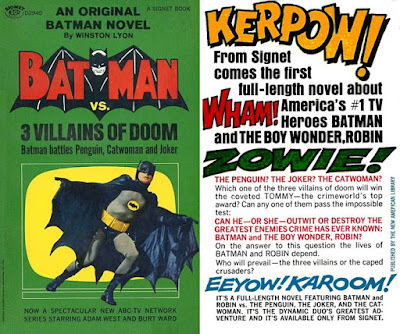 In the 1966 novel Batman vs. 3 Villains of Doom the Penguin, the Joker, and Catwoman vie for the Academy Award of crime, a golden machine gun: the Tommy. DC in the person of E. Nelson Bridwell considered the novel canon, mentioning the Tommy in a World's Finest letter column.

Although William Woolfolk (as Winston Lyon) certainly followed the Batman TV show in the details—Robin's "Holy" exclamations, Chief O'Hara, the bust of Shakespeare—the three villains' schemes are adapted from comic book stories. (And the Catwoman is wearing her comic-book costume, with its full-head mask and green cape.)

Once I recognized the stories' sources from their synopses in the Batman volume of Michael Fleisher's Encyclopedia of Comic Book Heroes, I assumed they must have been written by Woolfolk—having seen pages of a few of his scripts in fanzines, I thought he might have kept them on hand. Evidently not, at least in this case; once I saw the stories themselves, I changed my opinion. Copies of these stories must have been pulled from the files and sent along to him by DC.

Stories Adapted in Batman vs. 3 Villains of Doom

A Ghost for John Severin

On my posts about Sal Trapani's ghost pencillers, I figured he knew most of them from their working together at Charlton. I suspected the same sort of thing applied with John Severin's finding a ghost for this story from Cracked 70 (Aug/68). "Snow Flake and the Seven Dwarfs" is signed only "Severin" in his handwriting, and only the regular Cracked artists are listed in the masthead. I wondered where he could have known this artist from, and figured it must have been when he was drawing at EC; this penciller was the colorist there. 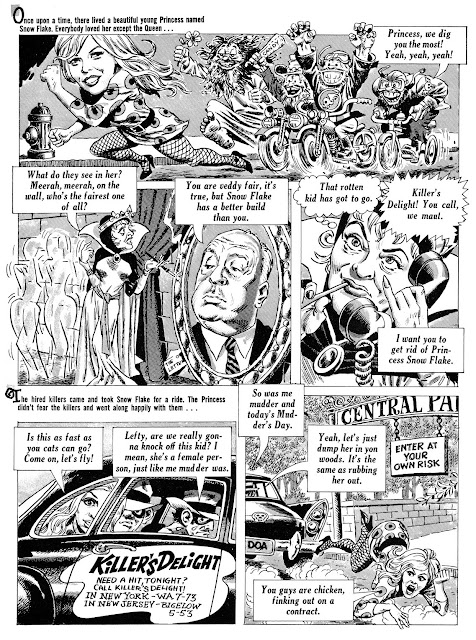 All kidding aside, Marie Severin would have her pencils inked by her brother, with both credited for the first time, a couple of years later at Marvel on Kull the Conqueror. There may be more examples of this ghosting at Cracked, but an awful lot of its issues are hard to come by nowadays.
Posted by Martin OHearn at 12:21 PM No comments: