Swipes Across the Water

It's not Roy Lichtenstein, but here are examples of comic book line art being swiped into paintings—artists Mehmet Gülergün (Nachts, wenn die Toten kommen, May 27, 1980) and Özcan Eralp (Das Geisterhaus von Lockwood Hill, Oct. 28, 1981) are not going for arch Pop Art camp as they use Nestor Redondo's and Jim Aparo's compositions from Swamp Thing 13 (Dec, 1974) and Weird Mystery Tales 4 (Jan-Feb, 1973). 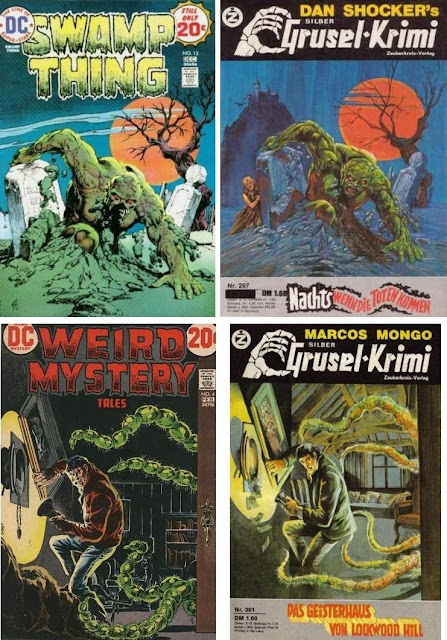 Silber Grusel-Krimi ("Silver Horror-Thriller") is a heftroman series; the heftromane (roughly "notebook novels") have been called the German pulps (the original Perry Rhodan series was one of them) but I'd call them closer to the predecessors of the American pulps, the dime novels. Prose pamphlets, they're on average 64 pages long in comic-book-style stapled binding, and many titles have come out weekly. They cover the gamut of genres: horror, SF, romance, Western, crime. There was one fairly long-running superhero series, 1956-76: when the publisher finished translating (and no doubt abridging) most of the Black Bat pulp novels from the USA, they got German writers to continue with originals.
Posted by Martin OHearn at 12:34 PM 2 comments: