That Joe Millard was the first writer on Sierra Smith back-ups in Dale Evans (see previous post) leads to the fact that he was the first writer on Dale Evans herself. Some quirks shared among the Dale stories and the Sierra story in #1 are "Ulp," "Owoooff," and "Eeeow." "Ub-blub" or a variation is used in both strips (as well as many at Quality)—as shown here from the Sierra story in Dale Evans 7 and her own story, the first  in Dale 4. (I included part of the next panel in the Dale Evans story to show Dale herself, although in long shot and from the back, in the crane cab.) Alex Toth art on Sierra and Jay McArdle art on Dale.

I had thought that the stories identified below with a question mark were Johnson's; they all seemed to match up with the style in some Wyoming Kid stories, another series he worked on. But in Robin Snyder's History of Comics, (Aug/90), the bibiography of Phil Evans' comics work shows stories (no title given) in Dale Evans 8 and 9.

Paul Talbot, in a letter to Grand Comics Database co-founder Bob Klein, recalled writing Dale Evans as well; there does seem to be at least one more writer alongside "?" after Millard leaves. I hope to sort this out in the future!

Dale Evans written by Millard and others

Joe Millard was credited with the first Sierra Smith story's script in the reprint in Detective 418 (Dec/71). The style matches up with stories at Fawcett and Quality, most notably the latter company's detective strips like Ken Shannon and T-Man. Pictured are the use of "Ooooo" in both Sierra Smith in Dale Evans 3 and Ken Shannon in Police 104 (Feb/51), and "gumfoot" (for gumshoe) in Sierra in Dale 5 and T-Man in Police 104. Other Millard quirks in the series are "Ulp" in almost every story, "Eeeahh," and "Owoooff."

Coincidentally or not, Alex Toth left Sierra Smith at the same time as Millard; the strip continued (under others including artist Al Ulmer) for the run of the comic, missing #20 and the final issue, #24, as the page count dropped. The Detective reprint credits Frank Giacoia as inker on the first Sierra; some more Sierra stories signed solely by Toth may be inked by others as well.

Although this list merely confirms guesses at the authorship of the Sierra Smith series beyond the first story, it leads into my next post on another Joe Millard series.

Posted by Martin OHearn at 12:43 PM No comments: 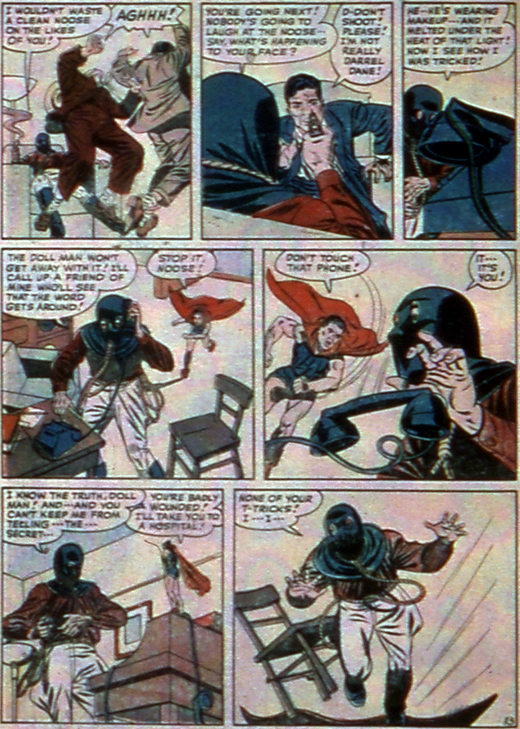 I'm told it's not news that Gil Kane drew Doll Man, over a decade before he drew the Atom. But I'll say, as I've said about others in earlier posts, that I haven't seen his credit on the Internet for a particular story, in this case "The Noose" in Doll Man 19 (Nov/48). The scripter is William Woolfolk.

In articles about the creation of the Atom, I've seen Doll Man mentioned as an inspiration, but the interviews I've seen haven't mentioned that Kane once drew the character. (So far I haven't run across a second time.)

It looks like the Doll Man figures have been heavily inked or even redrawn to bring them more closely into line with the Quality house style. Think of Jack Kirby's Superman and Olsen faces "corrected" by publisher's decree in his first issues of Jimmy Olsen; Kirby is still credited as penciller. The above page is where Kane's work shows through on most of the figures; on other pages Doll Man is not the only one unrecognizable as being by Kane. The Noose himself is almost always very obviously Kane's. 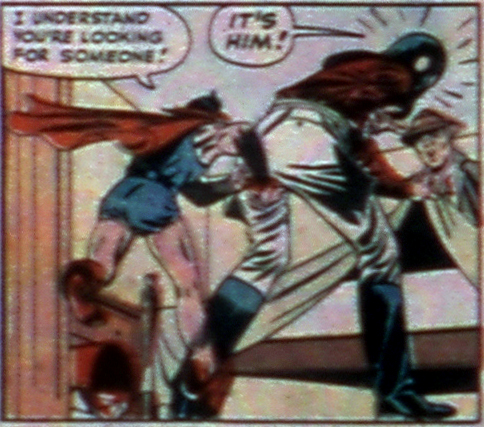 Posted by Martin OHearn at 11:25 AM No comments:

This is the Batman run that ends when the New Look takes over in #164.

The art on these stories is by Sheldon Moldoff and Charles Paris, with one exception: Moldoff inks himself on "Bat-Girl—Batwoman II" in #163 (one of Alfred's imaginary stories of the future).

Trapani Ghost: Can You See Who? 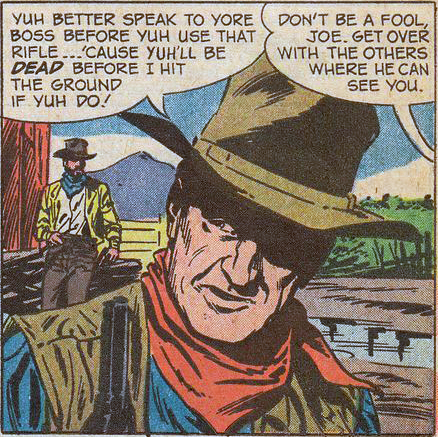 It looks like this has been a question mark for 45 years (if not, the attribution hasn't gotten onto the Internet): the penciller under Sal Trapani's inks on Dell's Movie Classic of the John Wayne Western, El Dorado (Oct/67). 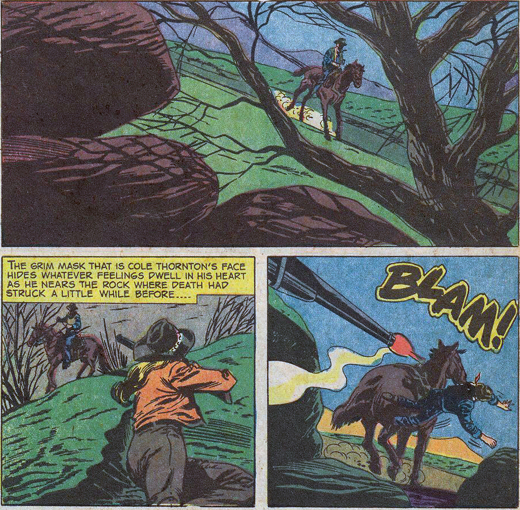 Trapani's inks are pretty overwhelming on most of the book; I think it helps to narrow things down to a few panels and sequences, ones where the penciller's style shows through as best it can. 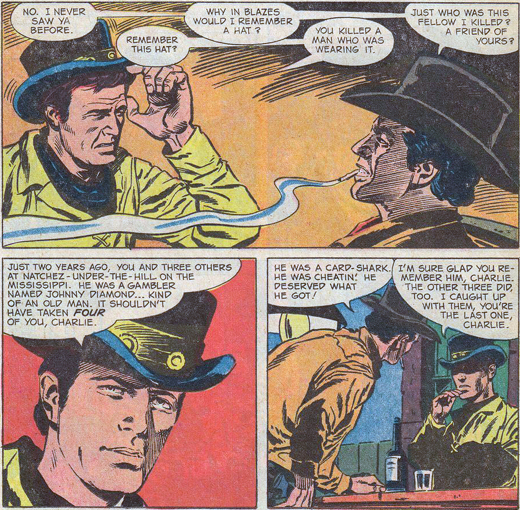 I've left this penciller's name on the comment screen so you can guess the artist with a fresh eye and without the influence of glimpsing my ID. 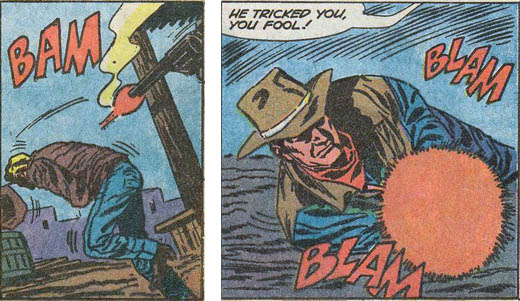