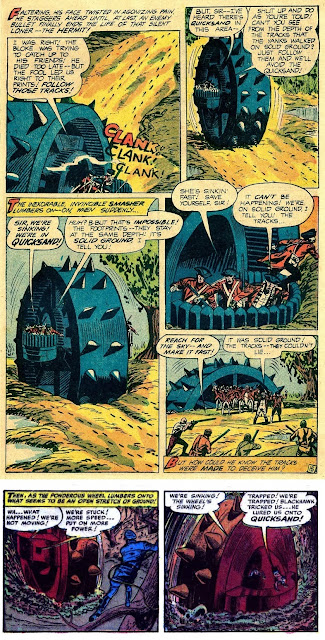 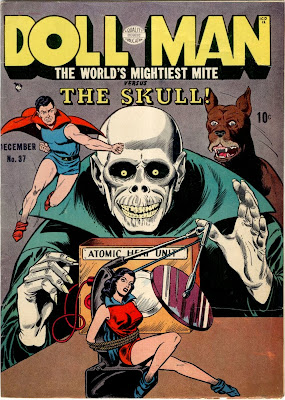 Fawcett, Quality, and Orbit, like clockwork, bought and published the stories William Woolfolk wrote this month.

He returns to writing Doll Man; in this story Martha Roberts (a supporting character since the first story) becomes Doll Girl, a role she'll play until the feature ends.

This is Woolfolk's final Wild Bill Pecos story as The Westerner reaches its final issue; it's published a page shorter than the script.

When Murray Boltinoff took over editing Tomahawk he changed the format from three stories per issue to a double-length one and a back-up (with #95 a full-lengther). #83, his first issue, introduces the "G.I.s of 1775," Tomahawk's Rangers, as supporting cast for the lead stories, but through #93 the back-ups still team Tomahawk with his original young partner Dan Hunter. The use of some fantastic elements carries over from Jack Schiff's stewardship.

Boltinoff didn't make any great change in the creative personnel; on this run the feature's mainstay artist Fred Ray drew all but one story, and one-time Tomahawk artist Bob Brown every cover, as well as the lead story in #98 and the backup in #101. Ed Herron and Dave Wood had been sharing the writing chores for a number of years under Schiff. 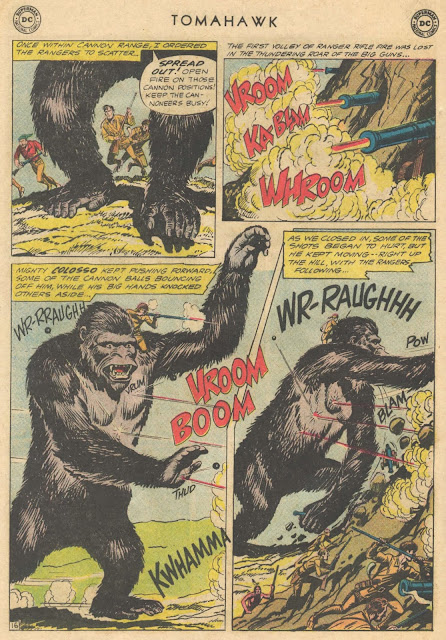 Boltinoff credits Herron, Ray, and letterer Stan Starkman every so often in the letters columns. The sure sign of Ed Herron's work in the Sixties is the sound effect Kwhamma; note the "a" at the end that the other DC writers at the time don't use. Some lettercol credits for Herron are for individual stories and some are general; he wrote most of this run, but not every single story before Bill Finger's first credit.

Posted by Martin OHearn at 10:41 AM No comments: 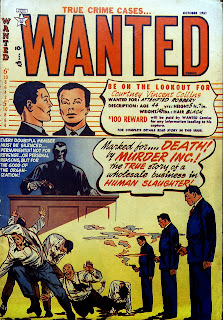 Crime Lab is a recurring Wanted feature; this is Woolfolk's only installment.

Showing again how Woolfolk used the idea from an earlier story as a jumping-off point to get a script rolling: Captain Marvel Jr., fought a Zombie Master in a Woolfolk script back in Master 75 (Dec/46), written in August 1945; in very general outline this month's Ibis version follows the same plot—zombie master hiring out zombies—but it's a completely new script. In the same month he wrote a Super Rabbit story about a duplicator machine, but I've seen neither that story nor this month's second Pinhead and Foodini one. And Doll Man fought an Undertaker in Woolfolk stories before Wild Bill Pecos did.

It took me three posts in a row (one, two, three) to come to a conclusion on the artist of Dell's The Monkees #1 (if by coming to a conclusion one means agreeing with Mark Evanier's identification of the artist.) It's Mo Marcus. Jerry Marcus later confirmed Mark's ID; Dick Giordano, the artist hired to do that issue, asked Jerry's father to pencil the job for him. José Delbo, of course, drew The Monkees from #2 on.

Who's Minding the Mint? (Aug/67) is Dell's Movie Classic one-shot adapting the film produced by comic book artist and Stooge-in-law Norm Maurer. Its art has been attributed to Delbo and then Henry Scapelli, but the pencils are by Mo Marcus; the skinny, angular limbs are the trademark seen in that first issue of The Monkees. (These are Jim Hutton and Walter Brennan, by the way; Marcus is able to capture their likenesses without the traced still-photo paste-ups that typefied Scarpelli's Dell tie-in work at this point). 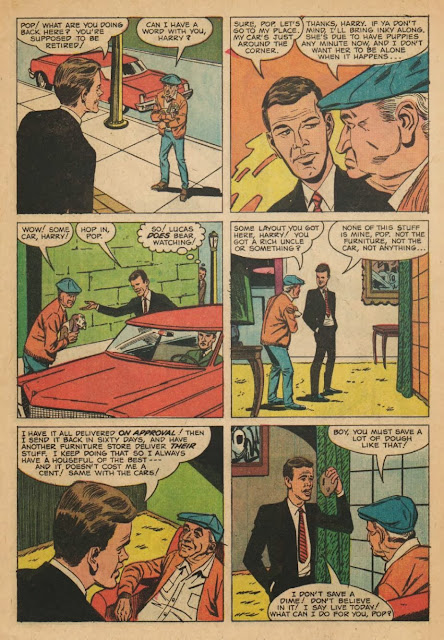 The writer escapes me so far. The inker is a question, too. Giordano and company (Sal Trapani and Frank McLaughlin)? On some pages I wonder if I see John Tartaglione's inkwork, but at Dell he pencilled much more often than he inked. The Mo Marcus art that I've seen signed at Charlton was inked by Rocco Mastroserio, so maybe I'm not recognizing Marcus's own inks here.
Posted by Martin OHearn at 12:16 PM 2 comments: