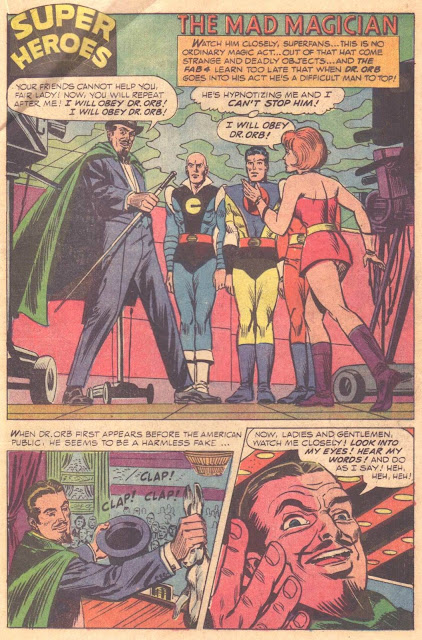 I'd IDed Bill Ely ghosting pencils for Sal Trapani on Dell's Superheroes #1-2, and my best guess at the time at #3-4 was Bill Fraccio.  In his blog, though, Lee Hartsfeld was tracking down Bill Molno ghosting Trapani, and suggested him as the penciller for Superheroes #3. Lee didn't get to pursue that on his blog before he discontinued it, so I'll back him up with this post and say that Molno ghosted #4 too.

I've repeated my IDs of Ely so these lists cover all the data not on the Grand Comics Database. #3's cover is the only one I 'd commit to Molno on, but I wouldn't be surprised if he and Ely pencilled their respective covers on 1, 2, and 4 too.

The writer looks the same for all four issues. But is it someone whose sole credit is this series or is it one of the usual suspects going for a more "with-it," caption-heavy style (and more in the manner of Bob Haney than Stan Lee)?