Dell Tie-ins by "The Mystic of the Lower East Side"

Wikipedia, may wonders never cease, has it almost right on Lionel Ziprin: "Ziprin wrote comic book scripts for Dell Comics in the mid-1960s, including Kona Monarch of Monster Island and several stories depicting combat during World War II." It was more accurately the early 1960s (and the "several stories" were the first 10 or 11 issues of Combat).

I mention the up-to-date Wikipedia entry because the original sources of info on Ziprin still floating around on the Internet, derived from his 2009 obit, sent historians way off in the wrong direction by saying he wrote for Dell "in the late forties and into the fifties." (In 2009 Mark Evanier, bringing the news of Ziprin to fandom's attention, soon concluded that "the bio of [Ziprin] had events somewhat out of sequence.") See the 2020 Allen Ginsberg Project post, which quotes that time frame but goes on to mention Ziprin's doing the first 10 issues of Kona without realizing that the 12-cent comic they show couldn't have come from that earlier era.

Part of the quote from Ziprin himself (in it he never says nineteen forties or fifties) mentions his doing movie adaptations too. So far I've found one movie adaptation by him and three original-story TV tie-ins. The Aladdin plot he was stuck with (although it would have aligned with his interests in mysticism) but the three TV ones are, like Kona, worthy of the description "hallucinogenic."

The Grand Comics Database doesn't even include Lionel Ziprin yet; it still attributes the early issues of Kona to Don Segall (derived from, I think--mea culpa--a long-ago misatttribution by me). 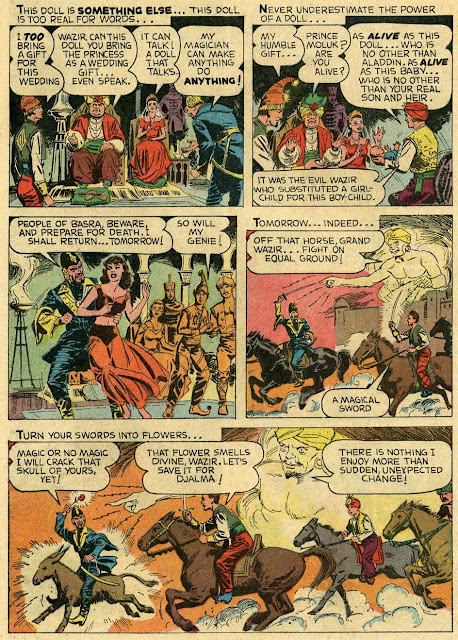 Ziprin was writing directly for Dell. In 1961-62 the split into Dell and Gold Key was looming, as according to the indicias these issues were among those "Designed and Produced by Dell Publishing" whereas most in this portion of the Four Color run were still "Designed and Produced by Western Printing and Lithographing" although all were printed and published by Dell. Perhaps that explains Paul S. Newman's records showing "Aladdin"; maybe Western bought a script from him before they found they'd lost some individual properties to their own printers. Newman's writing is, in a word, straightforward, whereas the page here is typical of Ziprin's more flamboyant style as seen in his Kona.

All the one-page inside-cover/back cover fillers in these were very likely written by Ziprin too. It seems to me, by the way, that some other writer did issue #2 of 87th Precinct.