One Springboard for Two Stories

As EC's publisher, Bill Gaines would read at home as much as he could to bring in "springboards" to story conferences with editor Al Feldstein. Generally they would take ideas, including some from Gaines's reading, to come up with plots and build new new stories around them. Famously, Ray Bradbury differed with them on the definition of "new" when they hewed too closely to a couple of his stories.

If comic book writers do any reading at all, of course others' ideas may resurface even unconsciously as springboards for scripts. Where is the line crossed into plagiarism?

C. M Kornbluth's story "The Little Black Bag" was published in Astounding Stories, July/50. The situation involves a doctor finding a bag of surgical instruments from the future. I've recognized that situation in two comic book stories that came out a few years later. 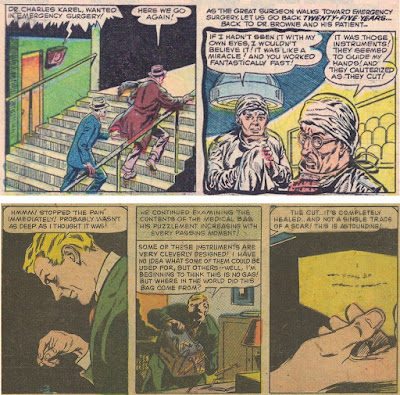 "Little Black Bag" is from Marvel Tales 134 (May/55); artist Robert Q. Sale, and writer unknown. "The Strange Package" is from Strange Suspense Stories 36 (March/58); art by (of all people, at Charlton) Gene Colan and script by Joe Gill. [CORRECTED FROM SSS 33 PER PAUL BRIGG'S COMMENT]

Neither follows the Kornbluth story's plot at all closely; that had a grisly ECish ending, and these two stories came out under the Comcs Code. Still, (especially considering the Marvel story's title), it's obvious the writers were familiar with the prose story. I wonder if Edmond Hamilton springboarded it even further into "The Burglar Kit from the Future" in Jimmy Olsen...

As to Joe Gill's style, in "The Strange Package" there's a good example of his joining two sentences with an "and" but no comma in a caption: The hospital was close and he walked through the early, gathering darkness toward it!
Posted by Martin OHearn at 12:54 PM 4 comments:

Art Lortie has transcribed Otto Binder's pay records, separating them by company. The first list he's posted is Binder's work for Timely, which covered 1941-48. Like William Woolfolk, Binder gave his scripts working titles that in many instances the editors changed. A few times the working title gives away the ending, so you can see the editors' point. At any rate, a number of stories in the records still have to be connected to the ones published.

This is the link:

Comparing Binder's records with Woolfolk's from the same era, it would seem that at Timely each was paid for quite a few more scripts than ended up drawn and published (I'm pretty certain it will prove so with Binder once all the published stories have been IDed). It happened most notably to both men on Captain America and Young Allies. 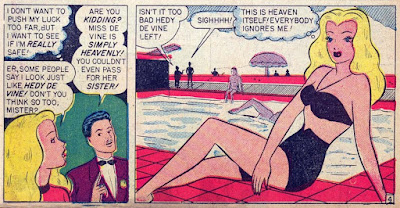 One difference between the two writers' work at Timely is that as it became apparent that the superheroes were destined to fade away for a while, Binder switched over to the teen titles there. This tier is from the Hedy de Vine story "Disguise the Limit" in Millie the Model 15 (Dec/48). I never looked for Binder's work among these stories, but knowing now that he was paid for this one (his title was "Incognito"), I can see the characteristic elongation of "Sighhhh."
Posted by Martin OHearn at 12:06 PM 4 comments: 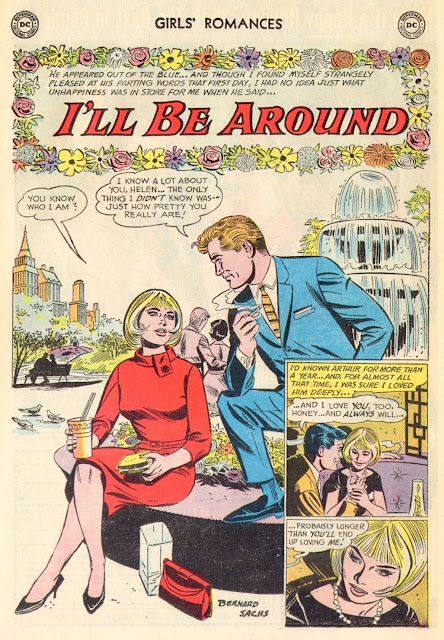