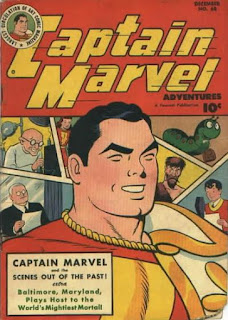 This Captain Marvel story was easy enough to track down—the problem was that I missed posting it to begin with. Three Cap stories in a row in the notebook looked like two, I guess, until I happened to look at the scan again much later and didn't remember dealing with this story.

I haven't seen the issue, but this seems the only place where the Moon Girl story could fit. International Comics didn't even occur to me as a Moon Girl venue when I posted; this was her only appearance in the title.

Readers helped find two of these: darkmark tracked down the Captain Midnight story after I posted it as unknown. SangorShop found the conspiracy of Pontiac story very shortly after I posted; it was reworked to 12 pages in publication, from 15 in script form.

The companies are Fawcett, EC, and Orbit.

Posted by Martin OHearn at 10:38 AM No comments: 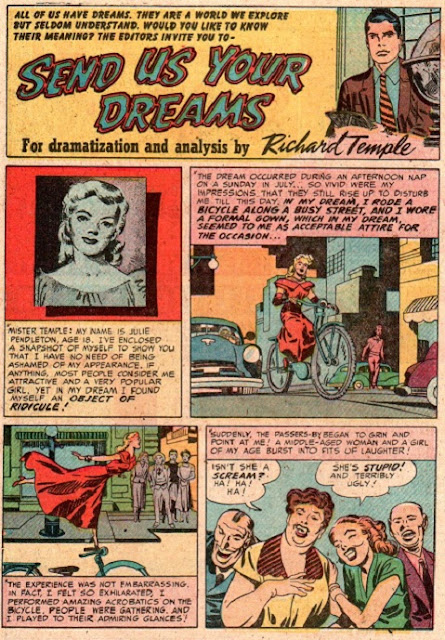 The Strange World of Your Dreams is a short-lived companion to Black Magic from Prize; Simon & Kirby are doing romance and crime comics for the company at this time as well. Dream analysis is an esoteric subject indeed (and in my opinion, the longer pieces here that use it in story plots work better than the short analysis-only ones.)

Jack Kirby's distinctive writing style is a little subtler than it will be twenty years in the future, but there's no mistaking him on most of these stories. There are few quoted words, but there are some. He emphasizes words that other writers probably would not, but at this point in his career most notably he emphasize entire sentences—generally final ones in long captions.

In the tiers comparing "Send Us Your Dreams [Julie Pendleton]" (SWOYD 1) and "X-Pit" (Mister Miracle 2, May-June/71, DC), note the triples: It was strange! Unexpected! Humiliating!; Explosion! Shock! Flame! Those were what made me take these as examples, but then I noticed these commas after conjunctions: "And, I thought I liked her!"; Then, the panic of aftermath! 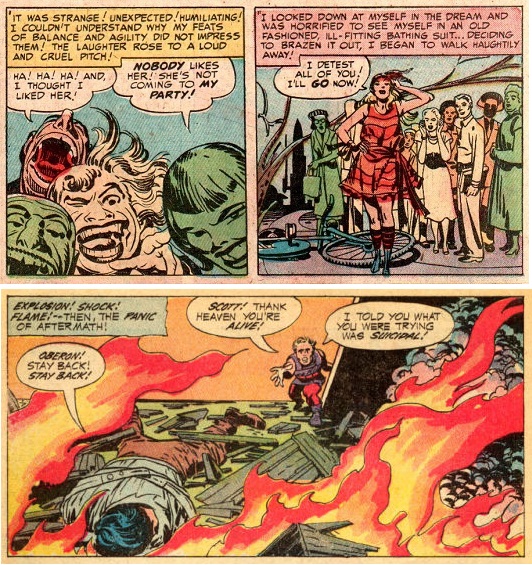 If other writers submitted scripts rewritten by Kirby, or coplotted, I don't see any way of telling. Jack Oleck had some scripts published without rewriting at Prize (easier to find in Black Magic); Kirby doesn't script all the S&K stories, just the great majority—other artists' as well as the ones he draws. I'll emphasize that I'm IDing only the final script as used in the comic book.

On the art side, it would take a better eye than mine to point out specifics of Joe Simon's work, if any, here. I'm not very sure of the inks on Kirby's pencils or on Mort Meskin's, but I wonder if George Roussos inks a number of stories.

“The Dreaming Tower” in #1 takes H.P. Lovecraft’s “The Outsider” (uncredited) and makes a rather different story out of it; Lovecraft’s shock ending becomes a throwaway plot point on the comic book story’s second-to-last page.

The Strange World of Your Dreams

There are two 2-page features indexed in Wanted 18 (I haven't seen the issue)—which of the two is Woolfolk's is anybody's guess. 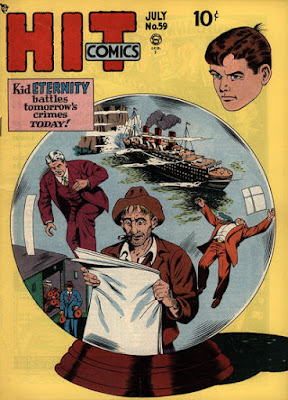 Tales of the Greene Freighter

Although in the real world, unlike in Watchmen, superhero comics were not completely replaced by pirate comics, a few publishers did test those waters. Quality's Buccaneers took over the numbering of Kid Eternity with issue 19 and lasted to 27.

Some of Sid Greene's work at Quality has been noted—the Inspector Denver story in Police 104, a romance story here and there—but his only series here that I know of is the second half of Eric Falcon's run in Buccaneers. Falcon was a soldier of fortune in Colonial times; not every adventure involved pirates.

Other artists work on the series in Buccaneers 19-23 before Greene comes aboard. He most likely inks himself in 25 and 26; I didn't even recognize the story in 24 as his until I looked over the series again before writing this post. 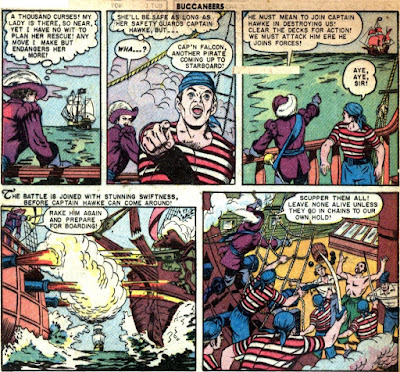