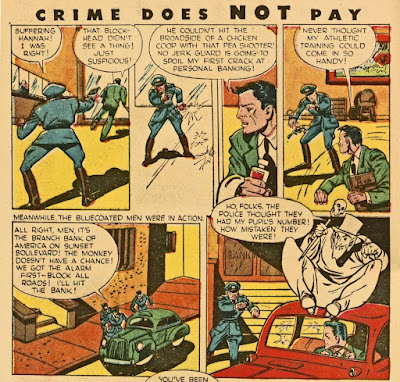 Dick Wood was credited for any number of stories in Crime Does Not Pay at Lev Gleason, but by no means all. This is a list of his anonymous ones that I've found. There are CDNP issues missing here that haven't been scanned yet. Scarce due to Forties paper drives? Fifties comic book burnings?

Dick Wood is recognizable by expressions like "Suffering Hannah," and in Crime Does Not Pay he has an even easier-to-spot characteristic on some stories. Starting with the bylined story "The True Life Story of 'Pretty Boy Floyd'" leading off #27, when he uses narrator Mr. Crime, very often the latter prefaces a speech or caption with "Ho, folks," or "Ho, Pretty Boy" to the protagonist, or just "Ho," all with a comma--"Ho, and where is he now?" The tiers are from the bylined story "One-Man Crime Wave" in #35.

I've mentioned Wood's use of the exclamation "Kazar" in The Claw, Jigsaw, and The Phantom; here he uses it in, for instance, "The True Story of Jean Cavillac" in #31 and "Wild Beasts of Paris" in #38--and it's after seeing it here that I realize it's meant for "Huzzah."

Dick Wood scripts without byline
in CRIME DOES NOT PAY

A Harvey Gh-gh-ghost on Bunny

Bunny_Lemoine The only attribution at the moment for the art on Harvey's Sixties teen-type title Bunny is Hy Eisman. His sneak signature is in a number of early stories in the form of the license plate "Hy 27 E" on four different cars in "Discarteque" (#1), "The Ultrazaric Decodifier," "Guests from England," and "Poetic Justice" (#2); the "27" (Eisman's birthday) is on photographer Elmer Snapple's door in "The Playpen Contest" (#1) and it continues on his door in, for instance, "The 'Zoople' Contest" (#2). 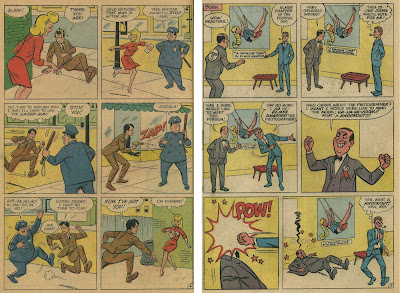 And since Eisman is the main artist, when there are figures (of secondary characters) in another artist's style, I'm going to say that artist was assisting Eisman unknown to the Harvey editors and thus a ghost. The artist I see is Gus Lemoine from Archie (most notably Madhouse). These pages are from "O. O. Heaven" and "The Playpen Contest."

Upon my first look I went along with the GCD, wondering if there were unknown artists on a few early stories, but I think it's the inconsistency in inking styles among different stories before one style is settled upon with issue #3. (Eisman himself or other inkers? I can't tell.) I'd give the main pencilling credit on all "Bunny family" stories to Eisman.

Posted by Martin OHearn at 1:14 PM No comments: