﻿
This is Batman's best period for me, the one in which I first read him. It didn't hurt to have the original writer still working on the character. The Clayface and Cat-Man series where each story built upon the earlier ones, the Dr. No-Face and Flying Bat-Cave stories, didn't disappoint in the rereading.

The stories I've read now for the first time are just as good. "The Bizarre Batman Genie" stands out—it uses the strange-transformation trope of the period to turn the second half into a Robin/Bat-Girl story when Batman becomes an antagonist.

"Targets of the Alien Z-Ray" in #305 is the only story in this run to use the sound effects Kwoom and Crzzzz and the creature roar "Rawwwr" that Arnold Drake, and not Bill Finger or Dave Wood, employs.

Posted by Martin OHearn at 10:34 AM No comments: 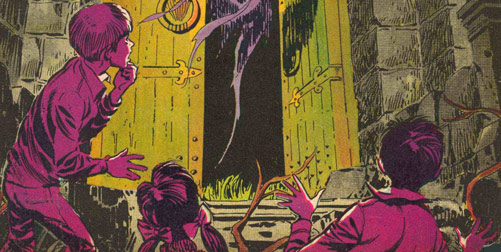 The Grand Comics Database notes that this House of Mystery cover, #174's, was once attributed to Carmine Infantino on pencils and inks, and then Joe Orlando on pencils and George Roussos on inks. Now it's deemed to be by Nick Cardy; it's listed as one of his in The Art of Nick Cardy (and in the DC Showcase volume, for what that's worth).

Nick Cardy had nothing to do with this cover. Possibly he submitted one, noting it on his own records, but if so, his went unused. Cardy didn't draw the cover published.

Maybe Infantino designed the cover, like he did others at the time. Maybe, maybe not. I don’t see Roussos’ work here.

My only question on the pencilling and inking here is whether Bill Draut might have helped pencil—note the head of the boy on our left. But going by his legs and so on, the main artist is Joe Orlando. I can't find the slightest trace of Nick Cardy's style in pencils or inks.

Does anybody see it here?

By the way, I ran across the GCD entry on HOM 174 when I glanced at the earlier issues, to find that attributions on Dial H for Hero that had been passed along from my twenty-year-old lists had been replaced—and I was still given the "credit." In fact, I had listed only the writers of 156-165 and 173, if I recall correctly; I didn't read the Binder and Dick Wood issues until March 2012, but I supposedly attributed them to Dave Wood. I certainly didn't credit 173 to Jack Miller. But somebody heard second-hand that Miller had taken over the feature, so blithely altered the entry from Dave Wood to Miller but left me still the source. (My latest Dial H list is a few posts back.) 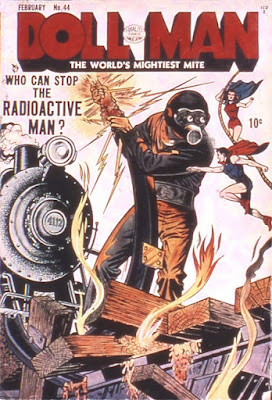 Doll Man comes to the end of his run embracing the horror boom of the early Fifties.

These attributions to William Woolfolk come from my seeing his style in the scripting; I haven't seen the pages of his notebook that, if I'm correct, record these stories.

"Q" is a writer I can't name, who wrote quite a lot for Quality in the Fifties: war, horror, some Robin Hood, some Daniel Boone; not to mention Blackhawk just before DC took over the title. UPDATE: I'm replacing the letter with the writer's name, now that I've figured out who he is: Robert Bernstein.

As for IDing the artists on these stories, I'm throwing my hands in the air and walking away. 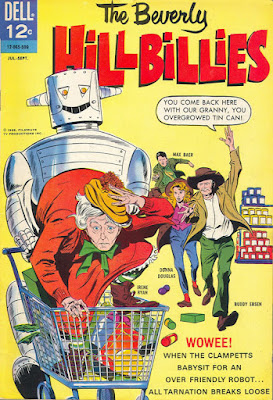 The TV title The Beverly Hillbillies is the fourth longest-running title after Combat, Ghost Stories, and Alvin for Dell following its split with Western Publishing. All covers are photos except for #10 by Gene Colan (as noted in the GCD). #18 is the only issue with three individual stories; other issues may include chapter titles in multi-part stories.
I'd hazard that the one-page inside-cover stories in the early issues, that I haven't listed, were all written by Arneson; the art anomaly among them is that the IFC to #3 was drawn by Fraccio and Tallarico, not the main story's Henry Scarpelli.

Dial H for Hero and G for Ghosts

It seems Jack Schiff, some time after the Sixties, recalled that Jack Miller had written Dial H for Hero. But then, Julius Schwartz remembered that he himself had used Gardner Fox as one of his writers on Superman. The credits on the Superman stories he edited (and the timing of Fox's being let go from DC) show Schwartz was mistaken. The writing style of the uncredited Dial H stories suggest that Schiff was equally mistaken. Schiff also noted, if I remember correctly, that Bob Kane actually did all the Batman artwork he supplied DC; I hate to think how many attributions on the Grand Comics Database would have to be changed if Schiff's recollections are taken for gospel on all subjects.

Jack Miller certainly did write for House of Mystery when it carried Dial H, but he wrote the Martian Manhunter stories. He and Dave Wood share some ways of writing—both use "Great ghosts" and Tense moments later..., but they differ in other ways. Where Wood uses "O-oh," Miller makes use of "Oh-h-h-h." The first Dial H story, among others, has a couple of instances of Wood's pausing after a first word: "I'm...back to normal again!" and "He's...entering an escape hatch of some kind!"

The two Otto Binder stories contain his old standby "Ulps." The Bill Finger story uses "Wha-aat." The Dick Wood stories boast "Great suffering cats" and "Howling horrors." Since these are the only stories of his I've seen for DC at this time—he had moved over to Gold Key, King, and Harvey—I wonder if he ghosted them for his brother Dave. 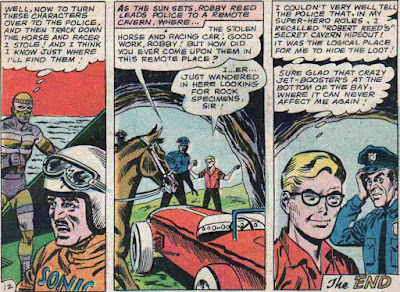 And I believe the final Dial H for Hero story is another example of Charles Nicholas' ghost pencilling for Sal Trapani. The pose of the policeman in the middle panel is typical Nicholas.

Dial H for Hero in House of Mystery

John Belfi noted that he inked Jack Cole on Plastic Man in the early Forties, but it seems he didn't say which stories he inked.

Actually, he did indicate at least one. He sneaked his name into the Plas episode in Police Comics 23 (Oct/43), the ghost train story. See the name on the suitcase tag in the middle foreground. 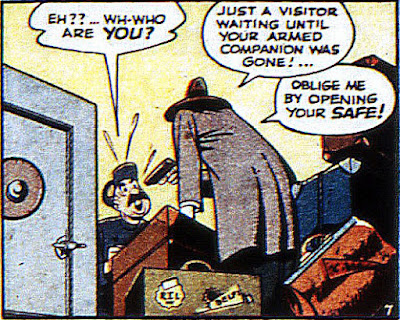 Posted by Martin OHearn at 10:51 AM No comments:

Time Tunnel and Land of the Giants 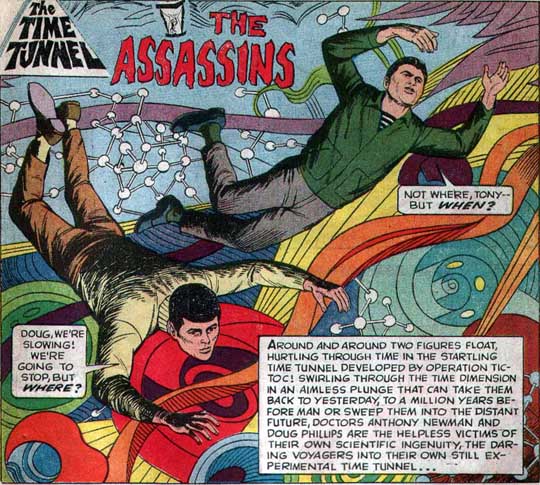 On these two titles from Gold Key—tie-ins to science fiction TV shows produced by Irwin Allen—the writer credits are as straightforward as on Girl from UNCLE: one writer on each.

Art on both titles came from Tom Gill. I can't tell how much was contributed by John Verpoorten, who's known to have assisted Gill on Time Tunnel; Ted Galindo pencilled for Gill on Land of the Giants. The Time Tunnel covers were paintings by George Wilson; Giants used photo covers.


Land of the Giants

Posted by Martin OHearn at 10:28 AM No comments: