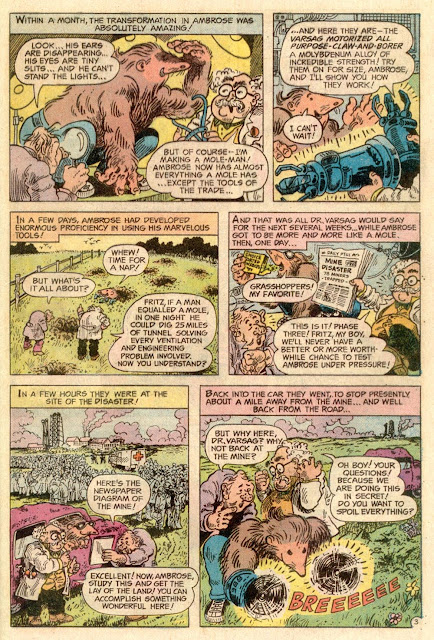 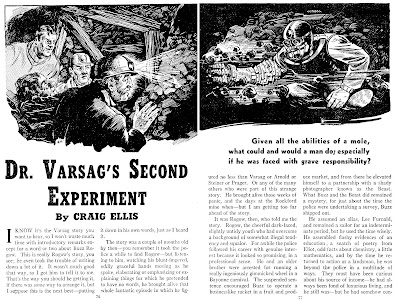 Both Varsag pulp stories were credited to Craig Ellis, but that pen name covered a different writer on each one (see the ISFDB; I found the info in the 1952 Day Index.). The first is the only SF story that Lee Rogow had published, as far as I know. The second is by David V. Reed. He used the pen name Coram Nobis for his Plop! scripts like the "Dr. Varsag" refry. (The artist is Lee Marrs.)

The first Varsag experiment in Amazing involved giving someone superspeed with mongoose-based injections. Does that sound as if some comics writer lifted it a lot sooner than 1975?
Posted by Martin OHearn at 2:12 PM 2 comments:

A 70s Marvel Artist's First Stories at Timely (UPDATE: Well, One of Them) 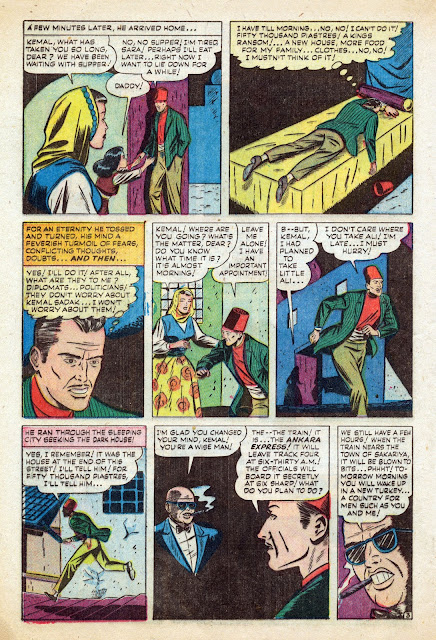 In 1948-49 as Timely started moving away from superheroes, their new crime and horror books had talky scripts and bland art; many of the artists have gone unidentified for the better part of seventy years, and may never be known.

Among the artists are some just starting out, who haven't developed the styles we recognize from the Marvel Age. Dr. Michael J. Vassallo has tracked Gene Colan's Timely work, for instance, to the artist's first stories, by working backwards month by month from his earliest signed work later in the Fifties—Colan's style is just the tiniest bit different a month before, and just a tiny bit more different the month before that, until at last it would be just about unrecognizable around 1948 if one didn't follow it step by step through the increments of change.

But Don Perlin's style seems to have sprung forth fully grown, as if from the brow of Zeus. This page is from "He Dreamt of Doom." So far I've looked at only the first two years of the crime books; they're something of a chore to go through before the scripts and arts become more appealing.

The Grand Comics Database has Perlin doing two one-page pieces in Western Winners 6 (Aug/49), but there I must confess I can't see him. When most of the artists start signing their work, Perlin does too; for instance, he has a story in Marvel Tales 110 (Dec/52) signed with inker Abe Simons.

UPDATE: Per Doc V.'s comment, I've dropped the other two stories ("Her Night of Peril" in Lawbreakers Always Lose 8 and "The Witch's Son" in Marvel Tales 96) that I'd listed here originally. I let myself see something Perlinesque in one or two panels in those, but I think "He Dreamt of Doom" shows Perlin in every panel.

Star Spangled War Stories was the one DC war comic not edited by Robert Kanigher at the start, so there are no records extant for its first issues' writers and artists. Reportedly it was Murray Boltinoff, solo, behind the indicia's editing credit to Whitney Ellsworth. 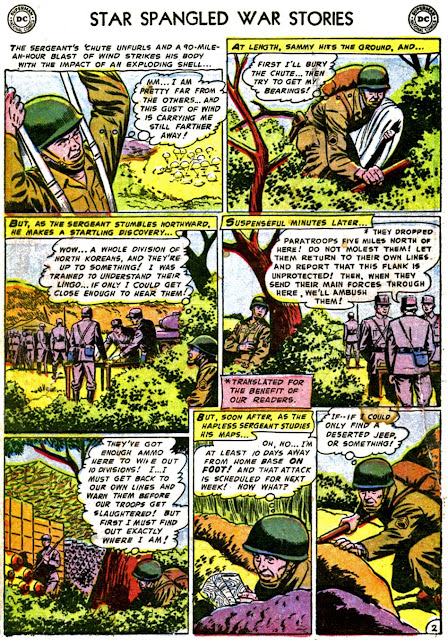 This page from "The Sad Sack Squad" in #9 provides four or five clues to Jack Miller. In some other SSWS stories he uses a sound effect he doesn't need that much in mystery or superhero scripts: Peeow for the sound of a shell. As usual, there are other stories in this run that I'm only half-convinced could be Miller's or Herron's; maybe on another pass I'll be better sure of some and add to the list.

Kanigher takes over editing with issue 13. The one story whose writer is not on his records, "Gen. Hunger" in #19, evidently is inventory from Boltinoff. The art is by Howard Sherman, who had a couple of stories in the earliest issues of SSWS but none that I can think of otherwise in the Kanigher books.

The Dinosaur Island Artist on Sub-Mariner

The "Dinosaur Island" artist (1946-48 at DC), Paul Cooper, works on Sub-Mariner at Timely before moving over to Batman. He has more than one inker here (possibly one of them is himself—who knows?). The figure poses are the better way to find Cooper's pencils when close-ups of faces show more of the inker's style.

There are a few other stories from this period that I've spent days considering and finally decided to leave off the list, and it's the inking that's made it hard to tell.


For what it's worth, in every story below, the final panel closes as you see in "Horror Island"—with "End", rather than "The End" as in the other features in these issues.

Posted by Martin OHearn at 9:45 AM No comments: