Oleck and Davis: The Gunsmoke Kid #1 That Never Was 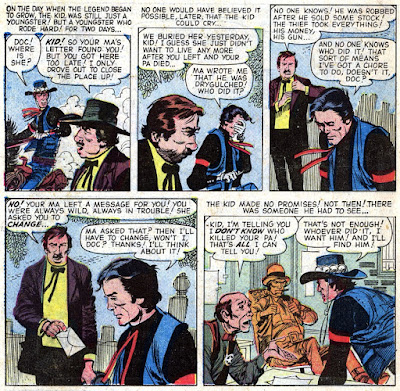 I would think that the Gunsmoke Kid was meant to be an ongoing series like the Kid from Dodge City and the Kid from Texas. Those two had their own 1957 titles that lasted all of two issues apiece; the Gunsmoke Kid didn't even make it as far as a number one issue before the Atlas Implosion struck. His four stories were printed out of inventory two years later in three of the post-Timely, pre-Marvel company's surviving Western titles.

As I was looking through Gunsmoke Western the last time, only one Jack Oleck backup story jumped out at me, but as I was going through Wyatt Earp I did notice his style on the Gunsmoke Kid story, and a closer look at the others showed he'd written all four. These tiers from the origin in WE 25 give us captions with the typical Oleck narration reflecting as much as reporting on past events.

Although Oleck left Atlas as of the Implosion, Davis would return a few times; as it happens, the cover to Gunsmoke Western 54 is a new Kid Colt/Wyatt Earp one by him.

Posted by Martin OHearn at 2:18 PM No comments: