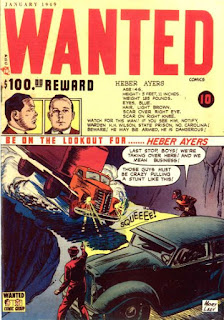 Quality, Fawcett, and Orbit are the publishers, as usual. William Woolfolk is assigned Lance O'Casey scripts in fits and starts; the last time he submitted some was in August 1946.

Swipe While the Iron Is Hot 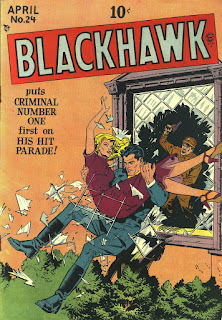 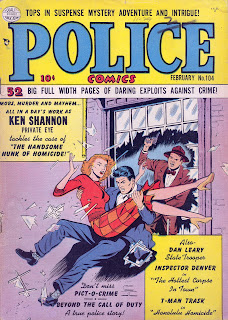 A few Reed Crandall Blackhawk covers were recycled into later Blackhawk ones, as I recall was pointed out in Alter Ego. This Police cover artist is so far unidentified, but probably the editors instigated this swipe so soon after publishing the original.
Posted by Martin OHearn at 9:41 AM No comments: 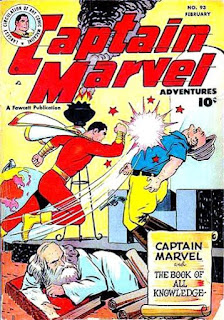 Continuing my transcriptions of William Woolfolk's script sales records, scanned by Marc Svensson through the good graces of Donna Woolfolk; my additions of publication data are in bold.

Quality, Fawcett, and Orbit are still the steady buyers.

UPDATE: I assumed "The Fighting Cabbie" fitted into Wanted 16; but now that I've seen the issue, I find no cabbies.

If the Monte Hale stories are being published in roughly the order received, the only issue of Real Western Hero available for either of these is the unindexed issue 75; the stories in 74 and (the slightly changed title) Western Hero 76-78 are Woolfolk's, written in other months. With more slots to fill in each Monte Hale Western, that would be the better possibility. UPDATE: darkmark found the tournament story in the February MHW.

Ken Shannon and the Aquaman Artist

Private eye Ken Shannon took over Plastic Man's lead slot in Police Comics at the end of 1950 and within the year received his own title as well. I index Ken Shannon in this post; I haven't seen a complete run of the post-Plas Police.

Shannon's main penciller was Reed Crandall. Sam Burlockoff has said he inked Crandall on the feature; Burlockoff's major credit that I know of is early war stuff at DC, but I'm not familiar enough with his style to credit him with particular stories here. Chuck Cuidera has been linked to Crandall here in much the way George Klein was once credited with inking every Superman story Curt Swan ever pencilled, be they inked by Kaye, Moldoff, or Forte if not Klein. I'll just put aside the question of Ken Shannon inkers altogether on this list.

I believe two stories are pencilled by W.G. Hargis, who got to sign a number of his Inspector Denver stories in Police. One story's penciller I can't figure at all.

The penciller just behind Crandall in terms of quantity (counting the appearances of the strip in both Police and KS) has been a mystery. The inking obscured his style as seen earlier at other companies. 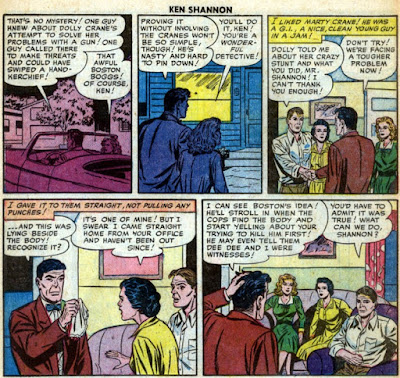 I see the work of John Daly. The young man shaking Shannon's hand is the best example of Daly's style in faces, showing through the inking; Ken Shannon himself is inked heavily to match Crandall's face for the character. The next panel's rather stodgy staging of the figures comes closest to the staging on the Aquaman page, the staging that typefies Daly to me. 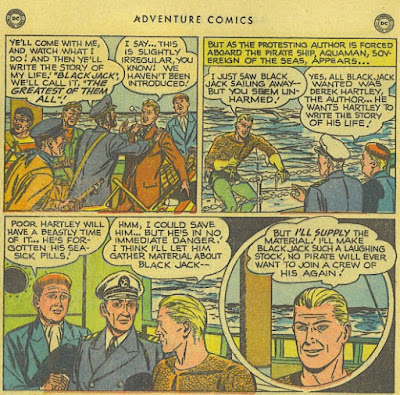 All ten covers were pencilled, if not inked as well, by Crandall.

The William Woolfolk credits are a sneak preview into his script records for 1951-52. In brief: Woolfolk and Joe Millard share use of the scream "Eeeahhh," but Millard uses his standby "Owoooff" that Woolfolk never does. "Q," a Quality writer of the Fifties I can't yet name, opts for variations of "Urghh" and "Iiieee." UPDATE: "Q" is Robert Bernstein


The back-up feature in 1-9 is Angles O'Day (Not-So-Special Investigator), not only wriiten and drawn but lettered by Jack Cole, and 10 presents a Flatfoot Burns by Al Stahl, the last of that series from Police and The Spirit.
Posted by Martin OHearn at 11:22 AM No comments: