The Golden Age Batman Artist You Never Heard Of

When asked if he drew a number of the Batman stories listed below, Bob Kane said "Yes." He didn't explain why the creator of Batman, using this temporary new style, would be doing a few work-for-hire crime stories for DC a year later in Gang Busters and such. The pencils for those crime back-ups have been variously attributed to Jim Mooney or Charles Paris; evidently they evoked Batman in a way the indexers couldn't put their fingers on. 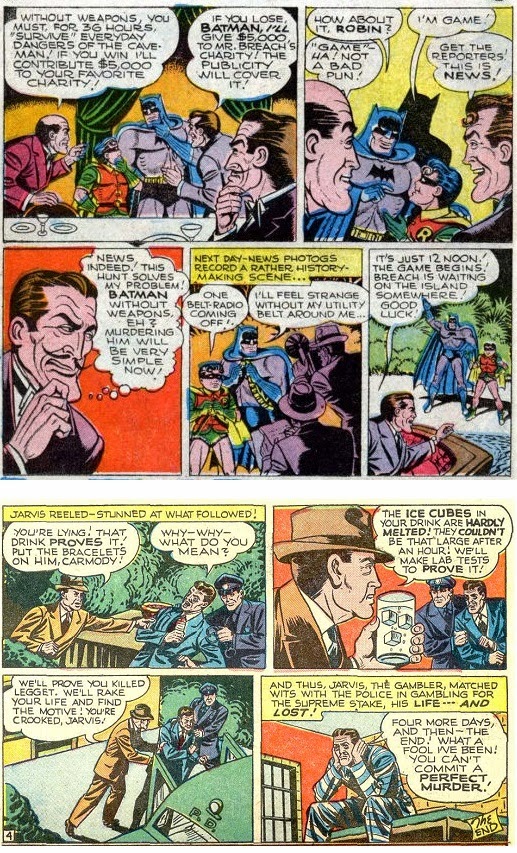 To be fair, I had some stories on this list (like "Nine Lives Has the Catwoman" in Batman 35) that I removed after a few more looks when I did see Bob Kane's work after all, or the work of various hands. (Maybe some of those Batman stories belong back here; maybe some here don't belong. The crime stories I'm sure of.) Although the inks for 35-36 have been attributed to Ray Burnley, with Jack Burnley's corroboration, I'd suggest there are different inkers on different stories; I won't try to ID them.

Above are tiers from two of the stories I saw in reprint in the Seventies ("Dinosaur Island" and "The Case of the Crooked Gambler"). For years I'd IDed this artist for myself as just the "Dinosaur Island artist." Then finally—last month—I saw a signed story by him at Atlas: "The House That Wasn't There" in Journey into Unknown Worlds 7 (Oct/51). The signature is Paul Cooper. He has other early-Fifties signed stories at Atlas as well as at companies like Youthful. He's not trying to ape Bob Kane at this point. 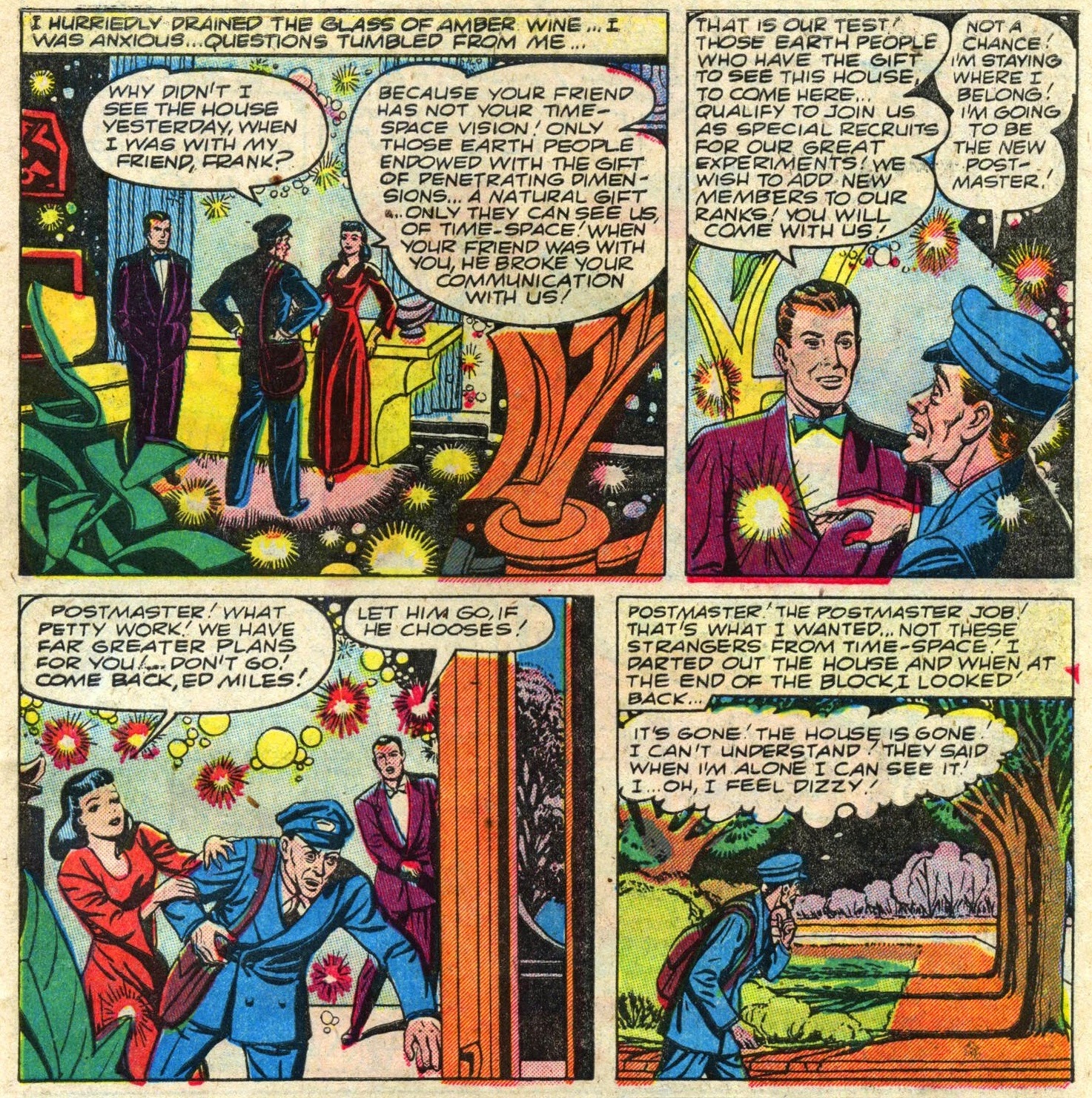 Trapani and Friends at ACG

Sal Trapani and his ghost pencillers come aboard for ACG's final two years of operation. Bill Ely is his sole ghost there for nine stories as of the 1967-dated issues. Ely's regular assignment at DC, Rip Hunter, ended in late 1965.

My impression is that Rocco Mastroserio penciled the first page of "The Mirror of Mystery"; Dick Giordano certainly did the remaining three. What do you think? 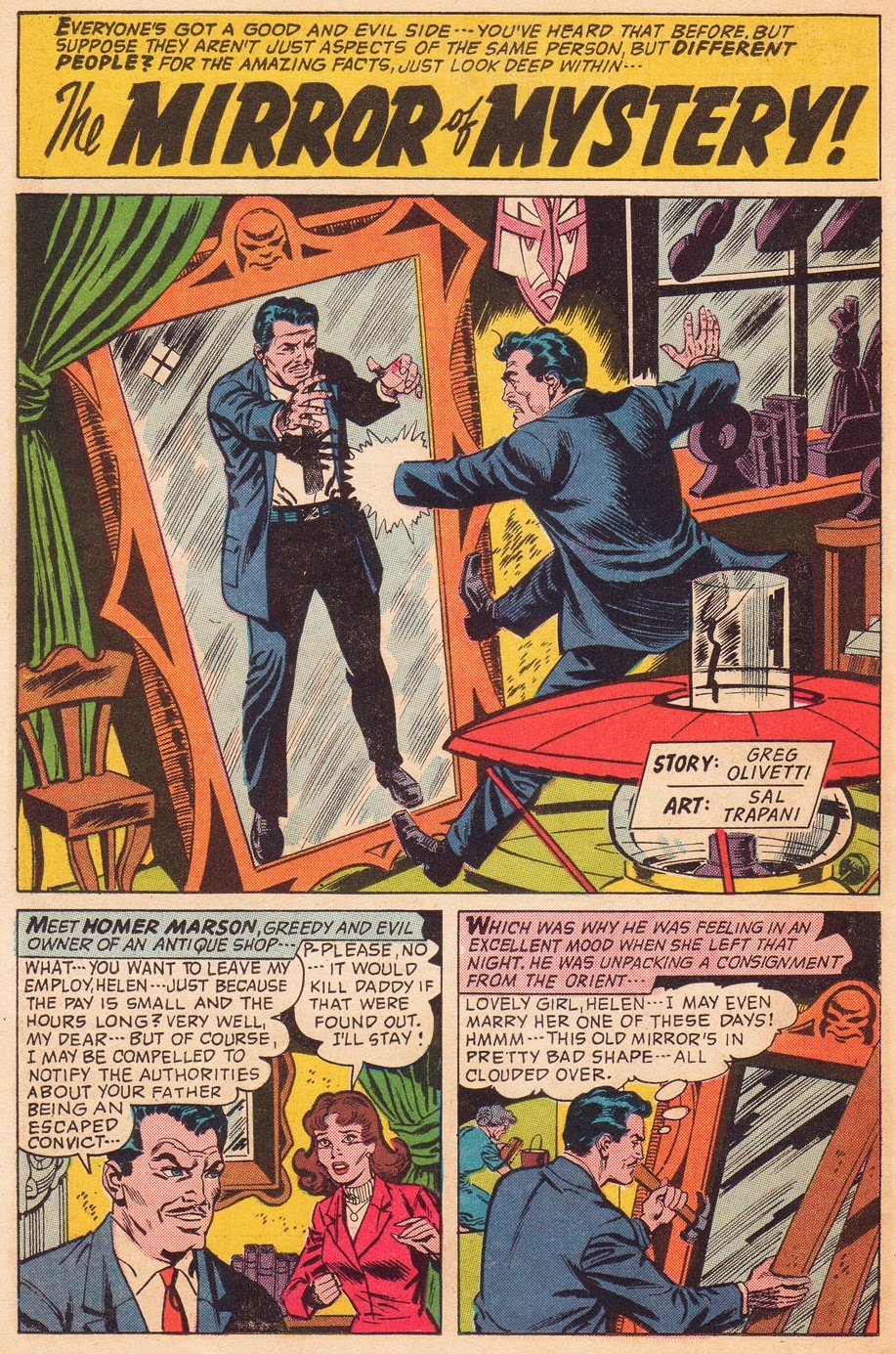 There were six other Ditko/Trapani stories at ACG after "My Ancestor—the Indian Scout," all credited to both artists, so not on these lists of ghosted ones. I daresay that Richard Hughes said "Oh, come on!" to the idea that the readers wouldn't recognize that particular penciller. (For what it's worth, after ghosting the pencils on Nukla 1 at Dell, Giordano gets a signature along with Trapani's on #2 and 4, as does Ditko on #4.)

Adventures into the Unknown


Interestingly enough, there's an ACG story ghosted by rather than for Sal Trapani. The art on the other new story in Unknown Worlds 53 is credited solely to Bob Jenney, but Trapani is inking Jenney's pencils.

Second Try on a Trapani Ghost 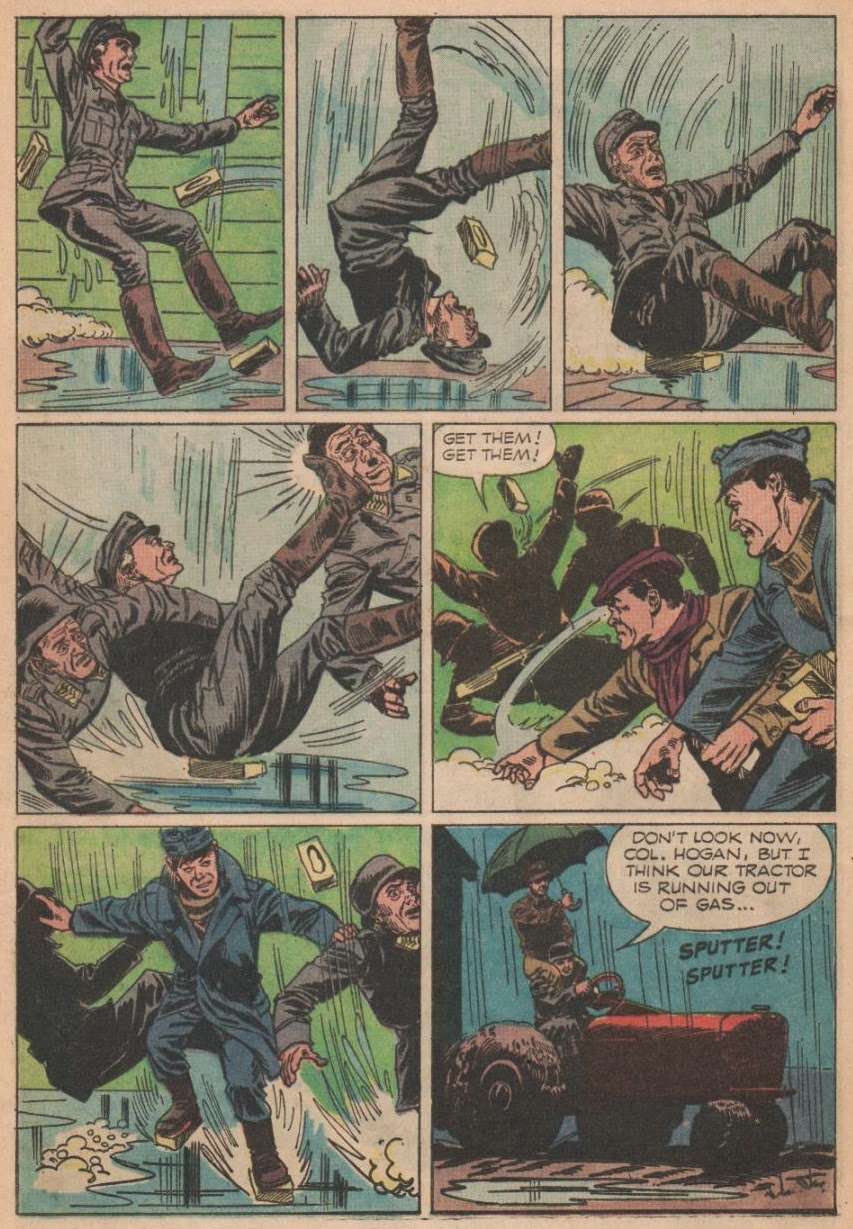 Artist- and writer-spotting is more an art than a science, but the more it can be treated like a science, the better. If more and better evidence leads to a different conclusion, a theory evolves.

In other words, I saw (here) Don Perlin-type faces under Sal Trapani's inks on Hogan's Heroes 4. But after finding the same penciller's style under Trapani inks in other comics, with some panels a bit more obvious, I revise my identification. Trapani's ghost penciller here is Bill Ely.

The funny thing is that I was led to this in a Trapani-less Charlton issue. The unsigned first story ("The Witness") in The Many Ghost of Dr. Graves 1 (May/67) was obviously by Ely but didn't seem to match up with the early-Sixties art of his at DC I was accustomed to. My first thought was, "He's using the same ghost penciller as Sal Trapani," and then I applied Occam's razor—it's simpler just to accept Ely as penciller in both instances.

The figures of Colonel Klink falling (especially in panel 3) on this Hogan's Heroes page are the clue to Ely's style here; that style peeks through on the cop in panel 1 of the Superheroes page, and more noticeably in the figure of Dan's father in panel 3. 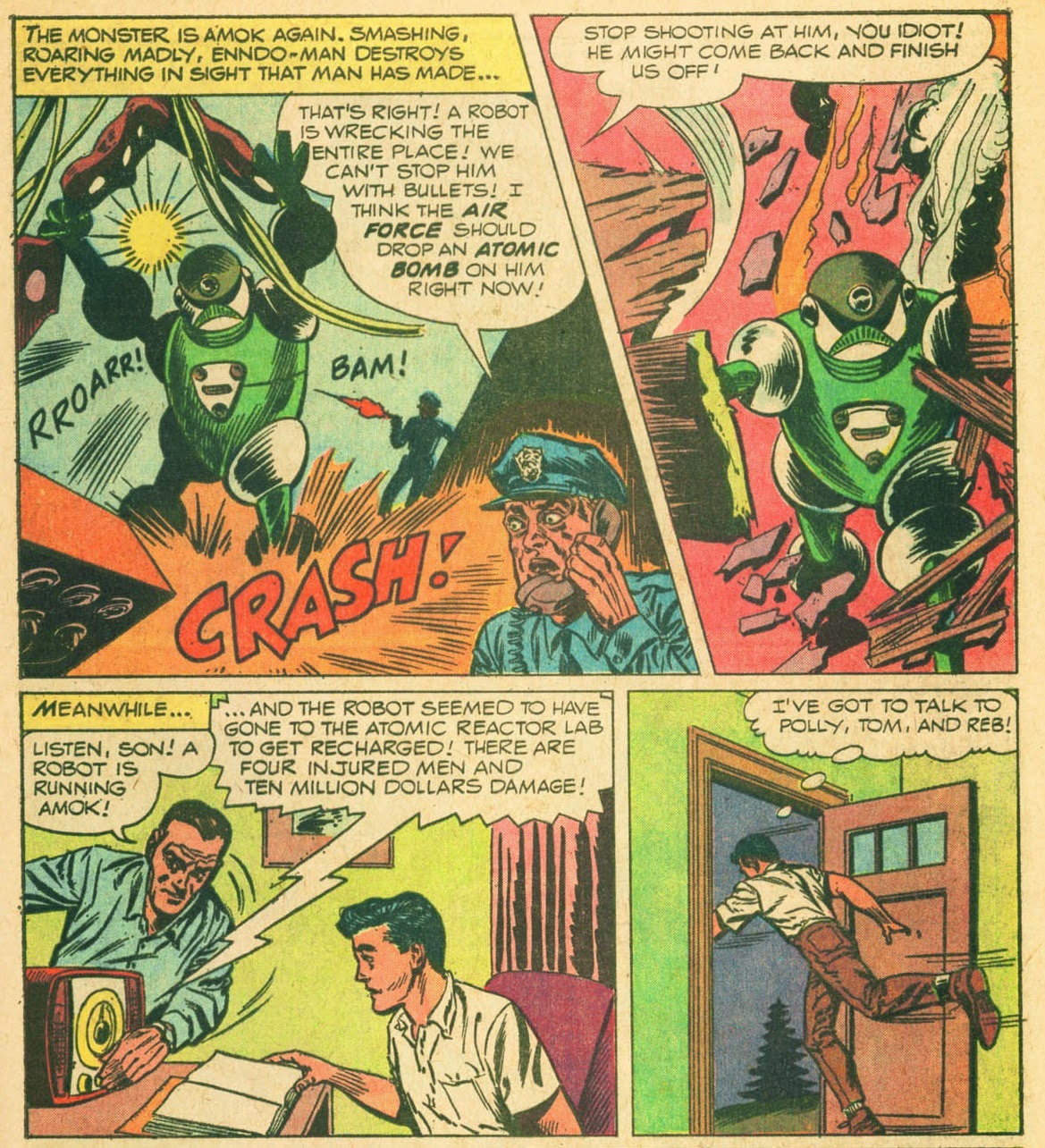 Another penciller (or two) did Superheroes 3 and 4 for Trapani. Ely did more ghosting for him outside Dell, and I'll list those in the next post.

Not the Two-Gun Kid 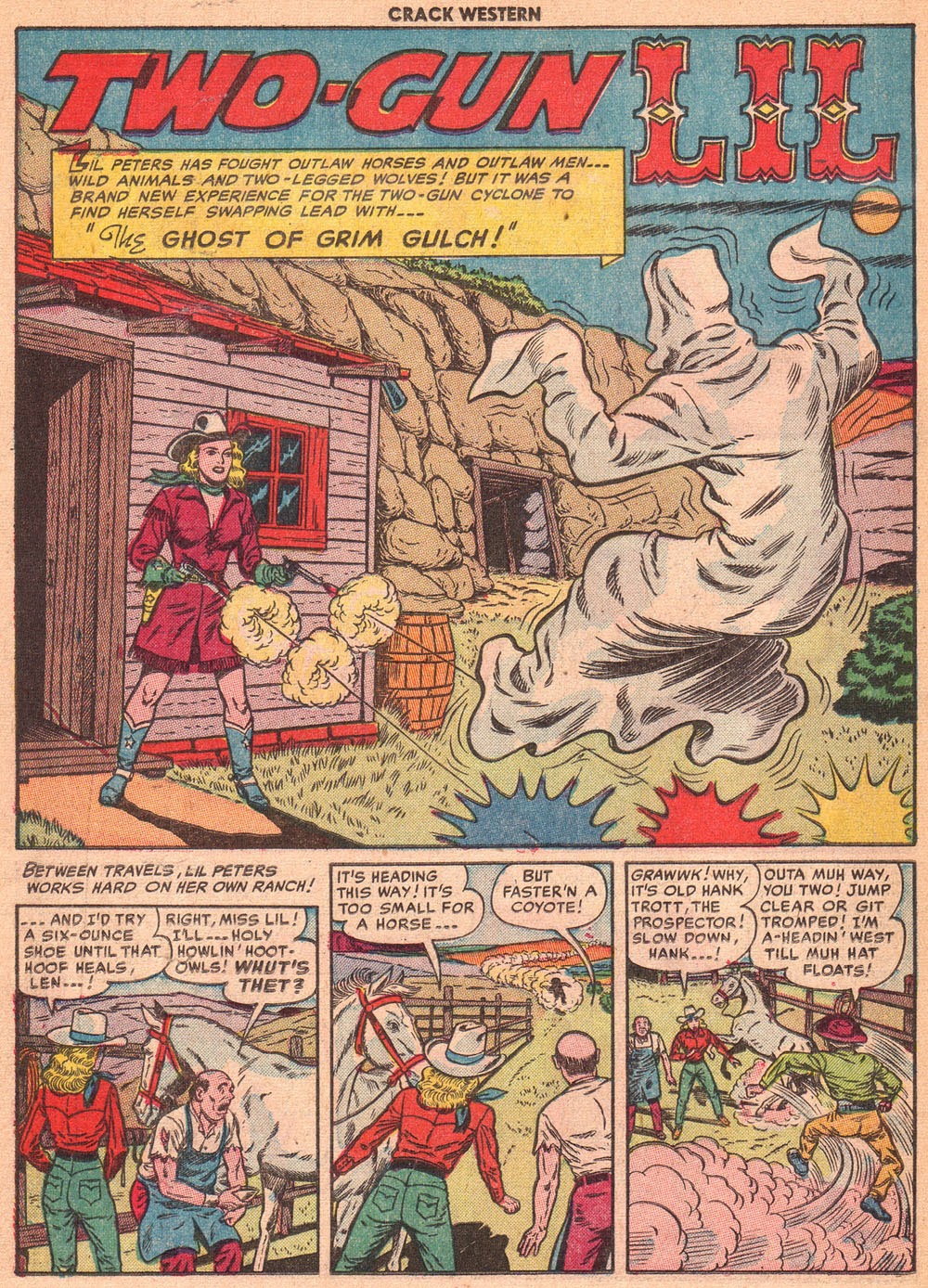 At Quality, Chuck Winter had a four-issue run in Buccaneers, as I posted here. He had twice that in Crack Western on Two-Gun Lil.

On the first four stories I'm taking the Grand Comics Database artist attributions as a start. I think I see three artists among the first four stories (the same one on #64 and 65). Leo Morey is known to have worked on the series, but I can't match him up from his signed stories at ACG a decade later; it may be that he's being inked by other hands here.

Dick Wood was credited for scripts at Charlton, but that was in 1969. He had a run of Phantom stories just after the company took over the title from King Comics. Those may have been inventory scripts, or Charlton may have hired him for his familiarity with the character; three of his scripts were illustrated by Charlton artists like Jim Aparo. The fourth, the only one drawn there by Bill Lignante, I'd imagine was completed at King and so looks an inventory story on all counts. But to paraphrase Arlo Guthrie, that's not what I'm here to talk about.

Scanning Charlton's Fifties output for Carl Memling stories, I couldn't help seeing some by Dick Wood; his style is so colorful: "Great suffering Hannah!" or in the case above, "Jumping cats!" I find a handful of his stories, all in the one year. Before anyone asks, I haven't IDed the writer on the four other new Blue Beetle stories of the period, in BB 20 and 21 (June and August, 1955).


anthology stories:
Out of This World

Posted by Martin OHearn at 10:21 AM No comments: