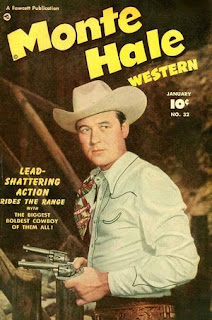 Fawcett, Quality, and Orbit are the familiar publishers here.

Monte Hale stories aren't that easy to track down, with his comics spottily collected or indexed; but this will be one of William Woolfolk's frequent assignments for four years. I did find one of this month's five in Real Western Hero; the unindexed Monte Hale Western 32 came out in the same month. These descriptions don't fit any of the story titles indexed in 31. UPDATE: darkmark IDed two of the Monte Hale stories, #32 having since been indexed on the GCD. I've corrected my transcription of "overage" here, which I'd put down as "average." Now that I've seen the issue itself, I can add the other two stories. "Indian chief" might be better described as "Indian warrior," but a chief is a character in it.

Likewise these Wanted stories fit between known stories in issues 15 and 17. They may have been published under titles other than Woolfolk's. UPDATE: They were. Now that I've seen Wanted 16, I've changed the titles here as the editors did there, and added the text story title.

247 would be an arbitrary start to a run of any comic except Adventure; the significance lies in the Superboy story, of course, not with Aquaman or the other back-ups. A number of my attributions here were circulated through fandom in the Nineties by Rich Morrissey, but on this list I've filled in the gaps in the run.

Jack Miller typically uses the captions Just then..., Before long..., The answer comes the next instant..., and In the next [adjective] instant...; Robert Bernstein typically the caption Moments after... instead of Moments later.... But these are not hard and fast differences, of course; in "The Robinson Crusoe of the Sea" (252) there's a Moments after..., but more clues point to Miller. If so, he happened to use that style of caption once.

"A World without Water" (251), out of all the Aquaman stories, uses the exclamations "Owoofff" and "Eeaahh" (also used in only one Green Arrow story: "The Man Who Hated Arrows" in 249). These are seen throughout the Dale Evans and Sierra Smith stories by Joe Millard, at DC, as well as the myriad of stories he did at Quality. The "Y-i-i-i-i" in both turns up in 250's "The Guinea Pig of the Sea."

All Aquaman art in these Adventure issues is by Ramona Fradon except 284, which is by Jim Mooney.

"How Aquaman Got His Powers" in 260 is the new origin. "The Manhunt on Land" in 267 is the crossover with Green Arrow, the other back-up, also written by Robert Bernstein at the time; the two villains switch land and sea theatres of operation. "The Kid from Atlantis" in 269 introdues Aquaman's new partner, Aqualad.

Aquaman begins appearing in the forerunner to his own book, four Showcase appearances, in the same month as Adventure 280. With 281, the back-up space that held Aquaman and Congorilla stories is devoted to double-length stories of either one, alternating, so Aquaman doesn't appear in 281 or 283. After Adventure 284 his back-up slot moves to Detective and then to World's Finest.

The Superboy story in 280, by the way, "Superboy and the Mermaid from Atlantis" (written by Jerry Siegel), takes two panels to account for the difference between Aquaman's Atlanteans with legs and Lori Lemaris's fishtailed merfolk. 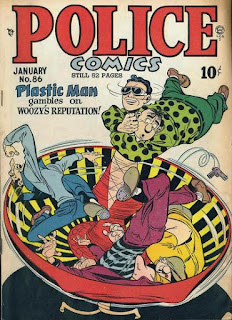 The scripts William Woolfolk wrote this month were bought by Fawcett, Orbit, and Quality, plus a publisher I hadn't heard he worked for: Prize (content supplied by Simon & Kirby on this title). This would be his sole known story for the company and his first romance story (whose publication data I couldn't track down from his description). In fact, in an interview decades later, he recalled he hadn't worked for Simon & Kirby.

As a sign of where the times are going for superheroes: Real Western Hero has taken over the numbering of Wow Comics, and Monte Hale Western, which will figure in May's listings, has taken over that of Mary Marvel.

Posted by Martin OHearn at 11:29 AM No comments: 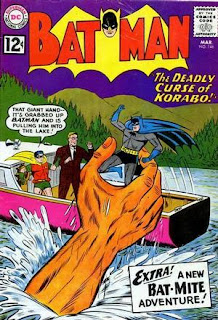 Bill Finger is the main Batman writer at this point, but not the only one. The sound effects Whapp or Whammp, and the spelling "Aaah" instead of "Ahhh," among other indications, show Jerry Coleman scripting. I had assumed Finger wrote all the Bat-Mite stories in Batman and Detective until I saw "Batman and Robin's Magical Powers"; Coleman, as I'd seen earlier, wrote Bat-Mite in a couple of World's Finest team-ups with Mr. Mxyzptlk.

The expression "Jumping Jonah" appears in the three stories I've attributed here to Arnold Drake. See also, among others, the splash page of "Captives of the Alien Hunter" in Challengers of the Unknown 25, April-May/62. The "Ayeee" in "The Deadly Curse of Korabo" is another clue to Drake.

Except for 148/1 and 150/3 (pencils by Jim Mooney and inks by Sheldon Moldoff), art is by Moldoff, penciller, and Moldoff and Charles Paris, inkers on different stories. Dick Dillin pencilled the covers of  143 and 150.

Posted by Martin OHearn at 1:08 PM No comments: 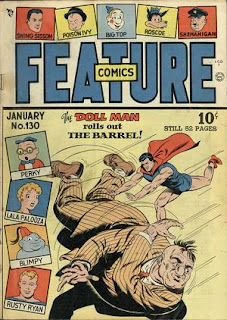 The usual suspects—Fawcett, Timely, Quality, and Orbit—bought from William Woolfolk in March '48. These were his final stories for Timely. Two Blonde Phantom scripts were published in more pages than he submitted them.

The True Crime story noted in January '48 must have been for Wanted (and by the timing, Wanted 14; the title is bimonthly at this point). It was paid at the same page rate as this month's True Crime, and the same as that month's Western Outlaw; after I posted, SangorShop noted that the latter was published in Orbit's companion magazine, The Westerner. I think it pretty safe to say now that all the crime stories Woolfolk has written so far were for Wanted; his rate there stabilized in January.

Posted by Martin OHearn at 9:10 AM No comments: