Riss on Gayle and Gayle

The Who's Who credits Pete Riss with Toni Gayle, the fashion model/amateur sleuth, at Premium. Since there are different indexers on different issues in the Grand Comics Database, some of Riss's Toni Gayle stories are IDed (those in Young King Cole and the fifth issue of Guns against Gangsters) and some aren't. The indexer who does ID those stories, citing the Who's Who for Riss, posits Janice Valleau as inker (I have no useful opinion there).

The Who's Who neglects to credit Riss for the spin-off strip, The Gunmaster—Gregory Gayle (Toni's police detective father). For each of Riss's Gunmaster stories in Guns against Gangsters, there's a Toni Gayle story by him in the same issue for comparison. 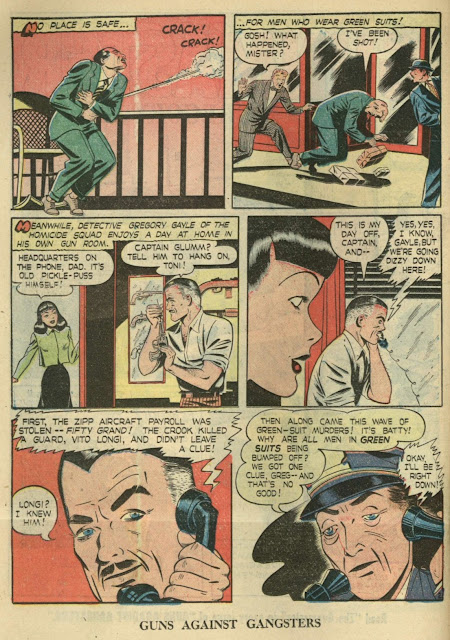 
in Guns against Gangsters

Posted by Martin OHearn at 9:30 AM No comments:

A Couple of Mickey Spillane's Comics Stories at Timely

Mickey Spillane had plenty of text pages at Timely, but not a single credited comics story. He was one of the group of writers working for Funnies, Inc. supplying strips to a number of publishers, Timely and Novelty being the two getting the longest spans of issues from the shop, I believe.

I hadn't seen a Novelty book until I started looking into the Funnies, Inc. output a few weeks ago, and was pleased to find a number of stories credited to the writers as well as artists on the splash pages. The bottom tier here is from Spillane's Cadet story "Espionage! In the Senate Building!" in Target Vol. 3 #7 (Sept/42). The other writers whose stories I've begun to find more of include Ray Gill, Kermit Jaediker, Roy Garn, and George Kapitan. The most noted, of course, is future novelist Spillane. So far I've found all of two stories I'd attribute to him at Timely.

He's known to have worked on the short-lived WWII-centric strip Jap-Buster Johnson, and in fact this story is the origin, "Friendship" from U.S.A. Comics 6 (Dec/42). The Spillaneism I've excerpted in all three tiers is "keed" for "kid"; the "yup" seen here is another one he uses. "Aghrr", seen later in the story, in various hyphenizations is used by a number of the Funnies, Inc. writers, although this is the one time I've seen Spillane use it. It's in the next story in #7, but among other things, Johnson's first name has changed from Doug to Everett, so I don't jump at Spillane for that one.

His one Timely superhero story that I've come across so far is "The Case of the Attempted Dreadnaught Disasters" in Human Torch 7 (Spring/42). A Spillaneism seen later in the story is "Ye gods." This is the point at which Carl Burgos had just stopped writing all the Torch stories he was drawing.

I hope eventually this will lead to Mickey Spillane’s stories elsewhere—for Captain Marvel and such.
Posted by Martin OHearn at 1:08 PM 5 comments:

Swipe from the Best

"If you're going to swipe, don't be shy about it" seems to be the guiding principal here. Don't use something hidden away in the back pages of some years-ago comic!

The original, the cover of DC's Boy Commandos 1 (Win/42-43) is penciled by Jack Kirby. The swipe, from the story "North Africa—Ahoy!" in Timely's Young Allies 8 (July/43) is in an issue both of whose two feature stories are attributed in the Grand Comics Database to three pencillers (not to mention two inkers), so who knows who did this particular panel?

The moral here might be "At least pay attention to what you're swiping." In moving around and restructuring Kirby's figures, the artist has put Brooklyn's foot on the end of the Rip Carter replacement's leg.

On the subject of swiping from DC, by the way, does anyone know of any specific examples of Superman-to-Captain Marvel swipes in the Forties? Supposedly there were scrapbooks full of them meant to convince a judge that Fawcett might as well have been sending operatives into the DC offices at night with microfilm cameras. In my far more casual perusal I have yet to stumble across any.
Posted by Martin OHearn at 9:55 AM No comments: