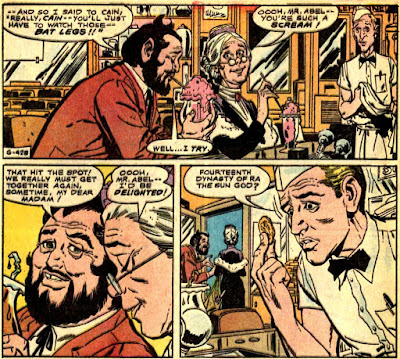 It's easier to find an artist by their work on one-shot secondary characters than on established ones. Thus you don't want to ID the pencils here by looking at House of Secrets host Abel; the soda jerk, in both of his panels, is a typical Mo Marcus character; he looks like he fell lengthwise in a vise.

Most of the framing material in HOS under Dick Giordano's editorship follows a storyline through the introduction, the interludes if any, and into the conclusion of the issue. In #84 the intro leads into the first story but the conclusion follows a different storyline out of the last story. I believe Bill Draut pencilled for himself on the #84 intro. Since he did do full art on most of the HOS frame stories Draut's inking the Marcus conclusion in #84 and the Dick Dillin full frame in #82 does make them look at first glance like his work.


Jack Oleck is credited on the Direct Currents page in #89.
Posted by Martin OHearn at 1:00 PM No comments: