The science fiction story backing up the Unknown Soldier in DC's Star Spangled War Stories 170 (June/73)— "U.F.M."—tells of a deserter from a military starship who finds an Ultimate Fighting Machine on an empty planet; it's a doomsday bomb that triggers itself. The story is credited to writer Gerry Boudreau and signed by artist Walt Simonson. 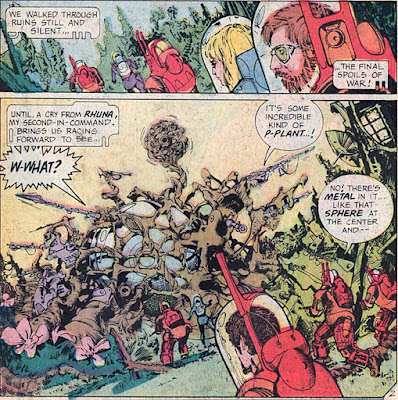 In the sequel by the same creators, "Return" in SSWS 180 (May-June/74), a patrol from the "empty" planet's civilization-gone-underground finds that the U.F.M.'s explosion hurled a part of itself, the Mind Module, to their side of the world, where it genetically engineers fauna and metal into a new killing device. Kyr and Rhuna destroy, they think, the last remnant of the U.F.M.

However, the happy ending of that story is premature; it seems Kyr died in Rhuna's arms, in a scene by another artist.

Rhuna tells that to Captain James T. Kirk in "Siege in Superspace" in Gold Key's Star Trek 22. The Enterprise has been sucked through a black hole into this other universe. Kirk and his crew help fight more vegetable-metalloid monsters. The trinket Kyr gave Rhuna was a remnant of the Mind Module, directing its monsters to the underground city. The Federation starship returns to its own universe, by creating another black hole when it destroys the Mind Module in a nova.

The Star Trek story was uncredited, but it was of course written by Gerry Boudreau (the artist was Alberto Giolitti). I didn't catch this surreptitious intercompany crossover when it came out, and for good reason—it was published out of order. Star Trek 22 was dated January 1974. Rhuna was telling Kirk a backstory that the readers hadn't yet seen.

By the way, the bearded and bespectacled man on the right in the first panel I've shown is Walt Simonson. Kyr, with his muttonchops, looks a lot like Howard Chaykin; I suspect other real-life people as more "actors" in the story.
Posted by Martin OHearn at 12:15 PM