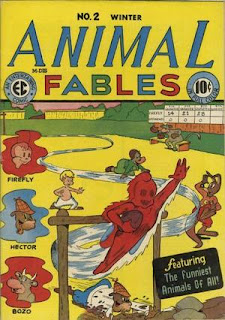 William Woolfolk submitted stories this month to Timely and Fawcett; there are ones written for OW but ending up at EC; and one is evidently for the company that paid for Railroader Ray in earlier months.

At times Korky Kangaroo is spelled in Woolfolk's notebook and at EC as Kangroo.

The Captain Marvel "School Editor" story was the closest I could find to match "Sports Editor," but there would have been some rewriting if so. "School Editor" involves a character called Dean Martin—not the singer co-star of the early issues of Jerry Lewis's comic, but a Mr. Martin who's dean of a school.

On the Young Allies story I need help in narrowing it down to issue of publication. Possibly, like the earlier 15-page YA stories, it went unpublished; it's not one of the final three, in Marvel Mystery 81-83.