Joe Orlando used Jerry Grandenetti as a ghost penciller in the mid-Sixties at Warren (on anthology stories and the Adam Link series) and at DC (on The Inferior Five and Scooter). Grandenetti's unmistakable pencils are enough of a clue, but his sound effects lettering was the clincher in an argument, for a while, as to whether Orlando changed his style for a couple of years so it coincidentally resembled Grandenetti's. Once Grandenetti started contributing full art to Warren under his own name, Orlando did some pencilling for himself again—and in cases like the later Adam Link stories, started inking even more heavily so that Grandenetti's pencilling style was, finally, nearly obscured. (How much Orlando contributed at all to "his" DC stories pencilled by Grandenetti, when Mike Esposito inked them, is a question to ponder.) 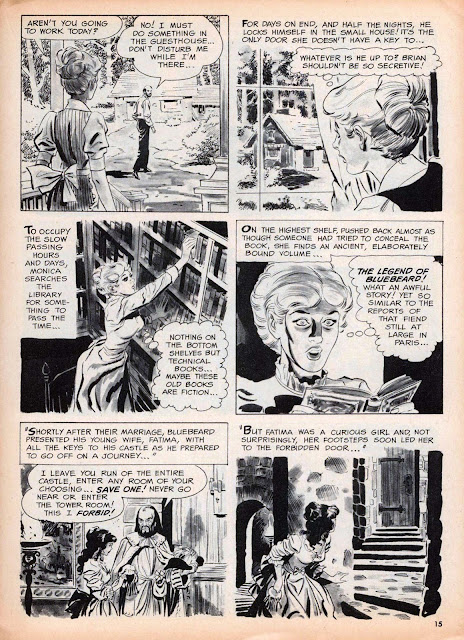 But Jerry Grandenetti wasn't Joe Orlando's only ghost. The art in "Image of Bluebeard" in Creepy 7, Feb/66 (written by Bill Pearson) is credited solely to Orlando, and its pencils have since been attributed to Jerry Grandenetti. This looks more like Orlando himself on pencils again, at first glance, but it isn't. His ghost penciller here is Bill Draut.

The boy's face in the panel below from DC's Forbidden Tales of Dark Mansion 12 (Sept/73), "A Change of Bodies" (written by John Albano) is typical of Bill Draut's work. Compare with the policeman in the background in the middle panel above. 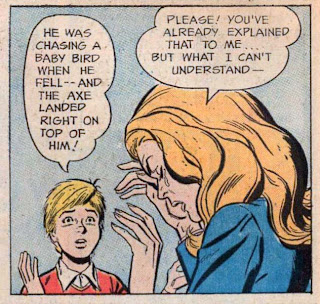 Draut inked Grandenetti at times DC under editor Orlando (Phantom Stranger) and they both worked on Swing with Scooter. Draut contributed to "Ahead of the Game" in Warren's Eerie 2 (March/66)—I haven't the issue to look at any more—did he ink Grandenetti as the GCD says, or pencil for Orlando?
Posted by Martin OHearn at 11:37 AM