Dick Wood became known as a scripter on the King Features heroes in comic books when Phantom stories for Charlton credited him.  I imagine his first scripts for Charlton were passed along out of inventory when King's own short-lived comic book line ended operations. 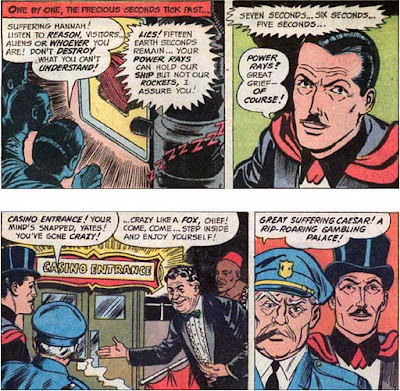 The singular expressions in these panels from the two stories in Mandrake 2—"Suffering Hannah" and "Great suffering Caesar" more so than "Great grief," which you can find from a number of other writers—are the sort I mentioned in my post on Dick Wood's Plastic Man stories at Quality in the Fifties. They don't show up in the first issue, but its "Y-yipes" and "Thunderation," among other things, are interjections Wood uses elsewhere.

Out of my handful of Mandrake issues, I come to writers I can't put names to in issues 4 and 6. (Jerry Siegel, by the way, told the Who’s Who that he wrote one Mandrake.) I would say that Wood wrote the Mandrake back-up in Flash Gordon 1. The inking credits here are Alberto Becattini's from the GCD; I hadn't recognized LeBlanc by myself.