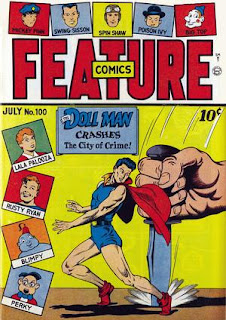 Here's my transcription of William Woolfolk's July 1945 sales records of comic book scripts. Bold indicates my additions of publication data. The original notebook was scanned by Marc Svensson through the courtesy of Donna Woolfolk.

Most of the sales this month are divided between Fawcett and Quality, and one story is sold to Hillman. And then one script, the Mad Hatter, has no payment marked received in the notebook because Woolfolk published that comic book himself (as an owner of OW Publications). This first story of the character appeared in the second issue because the printer fouled up badly; the first issue was planned for 52 pages but came out at 36.

UPDATE: I found this Manhunter story in Woolfolk's style after posting; the next one he writes, in August 1945, is published in Police 53.