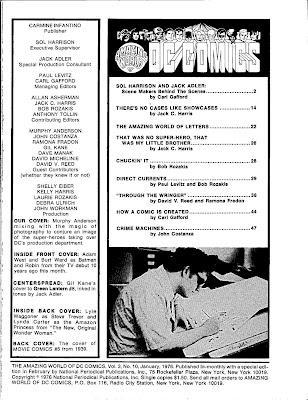 DC published a Jack Kirby piece and credited it solely to the inker. As far as I can tell, that miscredit has stood for over 35 years.

"Modern Technology and the 'Get-Away Car'" was a two-pager published in the house fanzine Amazing World of DC Comics 10 (January 1976). The contents page credited it to John Costanza. As of this post, the Grand Comics Database indexers credit the pencils and inks to Costanza and give him a tentative writer's credit. Perhaps, the GCD entry says, it was intended for Plop.

Costanza certainly inked it. But Kirby wrote and penciled it. Obviously a gangster piece was meant for In the Days of the Mob, the 1971 black-and-white magazine DC put out under the imprint Hampshire Distributors. I imagine Kirby intended it for #1, but the higher-ups shelved it for two pages of Sergio Aragonés cartoons.

Of course Kirby did humor—From Here to Insanity and Not Brand Echh, for example. But John Costanza never tried to draw in Kirby's style anywhere else. I think more Kirby shows through here than under Tom Sutton's finishes in some issues of NBE. 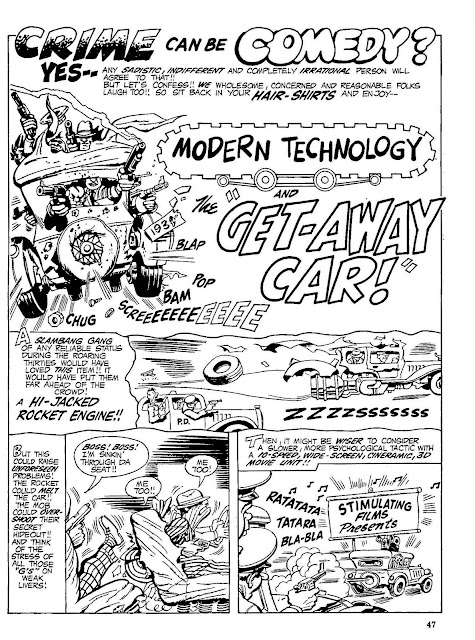 I would have thought the writing shouts Kirby. To repeat one of the first things I said in my blog: writers have individual styles. If they didn't, who would have cared that Stan Lee scripted over Jack Kirby's plots in the Sixties but Kirby scripted for himself in the Seventies? Was I wrong? If Kirby had hired John Costanza as a front and credited him with the scripts on the Fourth World books, would nobody have carped about the emphatically non-Lee captions and dialogue? 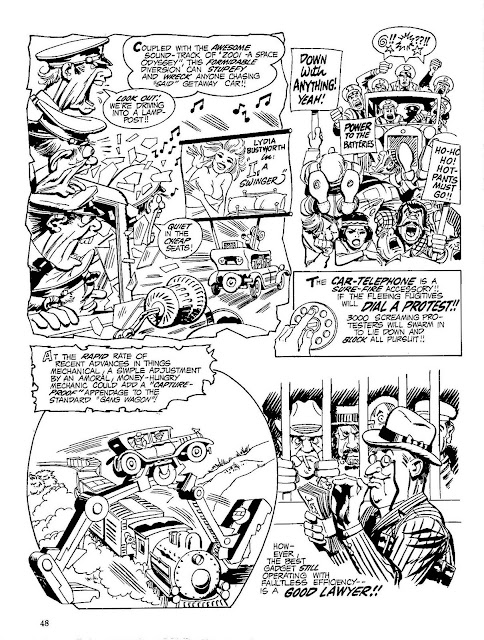 I see, for instance, the typical Kirby emphasis in unusual parts of the sentence, and the idiosyncratic use of quotation marks:

At the RAPID rate of recent advances in things mechanical, a simple adjustment by an amoral, money-hungry mechanic could add a "CAPTURE-PROOF" appendage to the standard "GANG WAGON"!

Since nobody else seems to have caught it in over a third of a century*, I guess I can't fault the Amazing World editors for not divining the correct credits in an inventory piece (I'll assume that the Costanza inks were applied a few years prior to 1975). Certainly DC wouldn't be petty enough to treat Jack Kirby as a non-person soon after he left the company. No more than they'd erase the Siegel and Shuster credits from Superman reprints...

At any rate, I repeat what I said in my Teen Titans post—the credits may not tell the whole story.

*Actually, it was caught soon after it was published—see the comments.
Posted by Martin OHearn at 12:33 PM