Sal Trapani used a lot of ghost pencillers in the Sixties. A number of Charlton artists were published at DC, Gold Key, and Warren, in many cases I imagine without the publishers ever knowing. Dick Giordano's and Steve Ditko's first stories at DC were ghost pencils for Trapani. Giordano's was the Flash-Doom Patrol team-up in The Brave and the Bold 65. Ditko considers his first work for DC to be the The Creeper (although he had two Strange Adventures stories, in numbers 188 and 189, published earlier) because he was working for Trapani on the latter. At ACG, on the other hand, Ditko was credited for the work he did with Trapani.

Giordano and Ditko's work appeared at Dell, I believe, only when inked by Trapani, so I suspect it was ghost work as far as the publisher was concerned. Super Heroes was pencilled by Bill Fraccio. Although Fraccio worked anonymously for Dell with Tony Tallarico's inking on Frankenstein, Dracula, and Werewolf, Super Heroes is signed by Trapani, making Fraccio a ghost.

At Warren, in Creepy 16 (August 1967), the credit line to the story "There Was an Old Lady" says "Art by Sal Trapani"; he signs the splash as well. The Grand Comics Database indexers suspect a ghost penciller here, and they're correct. The penciller is Charlton mainstay Bill Molno. 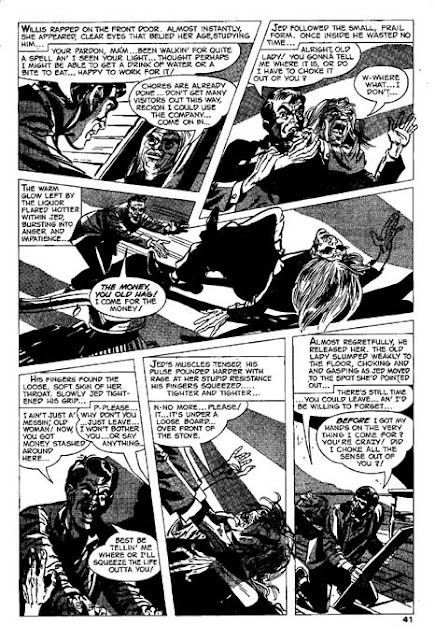 For comparison, here's a page from "Nightmare" in Charlton's Haunted 16 (June 1974). Here Molno is inked by Wayne Howard, with both credited. The face at the lower left of each page is the obvious point of similarity, but even the jagged panel corners used by no one else in that issue of Creepy suggest the same artist. 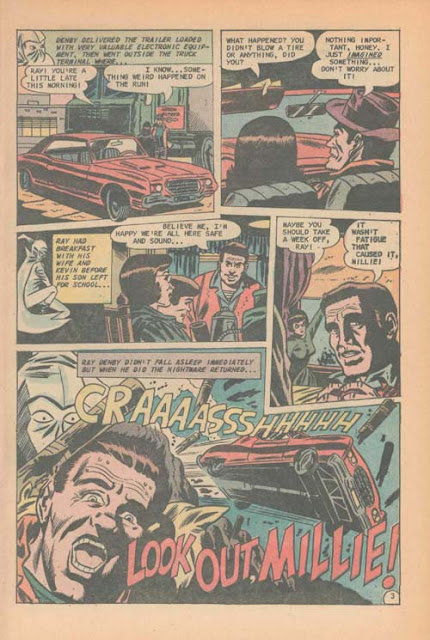 Trapani had work in later issues of Creepy, getting the sole credit in the GCD; I haven't seen those stories.

Certainly Sal Trapani inked a lot of art directly for the publishers, and if credit was given at all, the pencillers were credited. At some points he even did his own pencilling, as far as I can tell. But there were at least three Charlton artists with some work at Gold Key that I don't imagine the editors knew they were getting; I'll get to them in later posts.
Posted by Martin OHearn at 4:50 PM