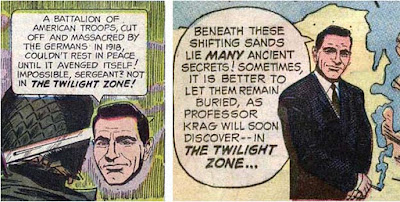 This list indexes the writers of the first ten Gold Key issues of The Twilight Zone. There were four earlier issues, which I've yet to see, published by Dell in 1961-62; Gold Key restarted the numbering with #1.

Those cited by the Who's Who as writing mystery stories in the early Sixties for Western (which would include the Dell TZs, then Boris Karloff as well as TZ, at Gold Key) include Leo Cheney, Royal Cole, and Marshall McClintock. There are no specific stories they're known to have done, so I can't match up the unknown writers' styles with particular authors.

Technically one story in each issue is not a Twilight Zone; there's no logo, no appearance by Rod Serling, and the copyright owner is Western rather than the TV production company, Cayuga.

A stat of Rod Serling's head was used in any number of stories beginning with the third issue. Above, on the left, is the head's first appearance, in a Mike Sekowsky story—and I don't think the head itself is by Sekowsky—then, on the right, it's definitely a stat in an Alex Toth story. Below are two examples from Frank Thorne stories; in earlier ones, he got to draw Serling. 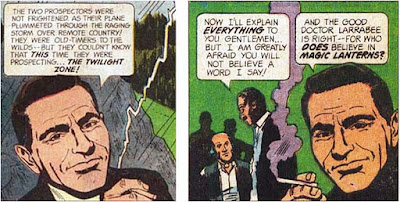 The art attributions are on the Grand Comics Database.