In The Comic Reader 198 (Jan/82), Mike Tiefenbacher says that Ralph Reese "definitely wrote the famous 'peanut butter' Dynamo story ('Bad Day for Leonard Brown')." In Comic Interview 133 (1994), Dan Adkins mentions to Lou Mougin a "story about peanut butter or something" as being written by Reese. The Tower Comics checklist in Comic Book Artist 14 (Jan/01) credits the "Bad Day for Leonard Brown" script in Dynamo 3 to Reese.

The only problem is that the story in which Dynamo is buried in peanut butter (at a PB factory) is "Once upon a Time..."—the Weed story in Dynamo 4, drawn by Steve Ditko and Wally Wood (Chic Stone drew "Bad Day"). 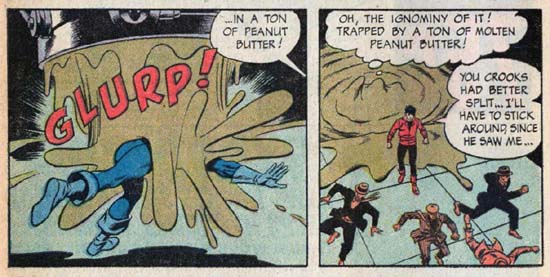 I had to work pretty much from scratch at identifying Ralph Reese's writing style, since I didn't know which of those two to start from; but then finding a couple of Marvel stories crediting him as writer/artist helped. (With "fooey," "h'lo," and "woops" among the expressions tying together a group of Tower stories, I found "woops" in one of Reese's Marvel stories.) The peanut butter/bad day problem solved itself when I saw that he wrote both stories, among more than twenty at Tower.


These are not necessarily every story Ralph Reese wrote for Tower; I'm still looking at a few in 1966 that I haven't yet convinced myself on. ("Corporal Dynamo" and "Operation Armageddon" just squeaked onto this list; "The Hyena" in Dynamo 2 didn't.)

Reese uses the names of Wood assistants Battersby, Brand, Coleman, Pearson, and Reese for some walk-on characters.
Posted by Martin OHearn at 4:47 PM