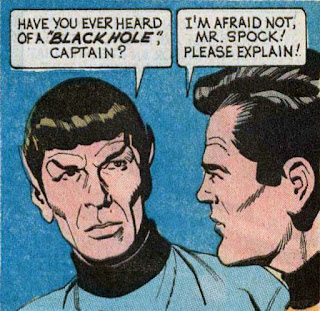 In the second issue of The Monster Times (Feb/72), Len Wein listed his writing credits on Gold Key's Star Trek, mentioning that the writer before him was Dick Wood. The list included all the stories Wein had submitted, even if some hadn't been published yet; all soon were. Wood wrote #1-8, Wein #9-16. Gold Key started running credits with #47. This list gives the writers of #17-46, going by their styles.

The Comic Reader 96 (Apr/73) says that John Warner "...reports doing...some Star Trek stories with some rather familiar people cameoing." Two crewmen in ST 21 are named Levitz and Asherman, after Paul Levitz, then the publisher of TCR, and Allan Asherman, new to DC's editorial staff (and later author of The Star Trek Compendium).

To repeat the gist of an earlier post, #22's "Siege in Superspace" is a sequel to two credited Boudreau science fiction war back-ups in DC's Star Spangled War Stories. The panel above, with 23rd century starship captain Kirk ignorant of black holes (standing in for the 1974 reader about to get some exposition), is from that story.