A Golden All-Star Book from Western (as a Golden Press imprint) is a storybook--prose and illustrations. Online sellers have mistaken it for a comic book--not only is it comic book size in dimensions and number of pages (36 including covers), most of the writers and artists were working at Western's Gold Key comics at the time. The exceptions as far as known credits go: Mary A. Mintz, whose only comic book credit is a story in Spidey Super Stories at Marvel, and Bill Ochs, credited on no comic books. (The Greatest here, by the way, is a novelization of the Muhammad Ali movie.) 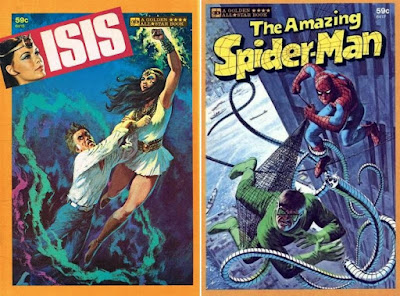 These two covers are the only paintings among almost all photo ones (Fat Albert is line art). I couldn't say who the painters are.

Posted by Martin OHearn at 1:24 PM