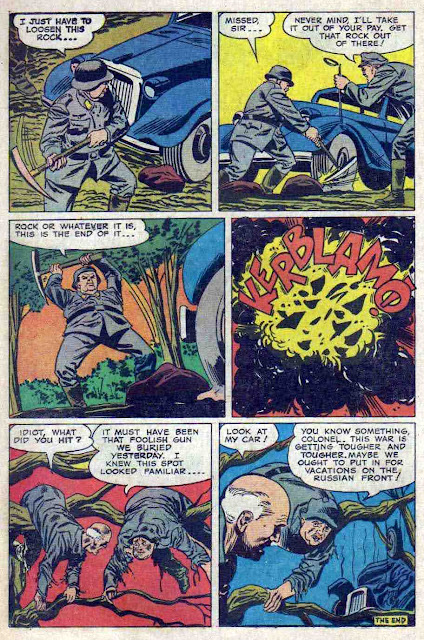 Continuing on from my ID a few posts ago of Bill Molno as one of Sal Trapani's ghost pencillers on Dell's Super Heroes, here he is on two issues of Hogan's Heroes. This time I have a writer, too--Alan Riefe, who took over after Paul S. Newman wrote #1.

The thing that set me on to Alan Riefe at Dell earlier (on <i>Get Smart</i>)--he wasn't previously known to have been there--was Kerblam, Kerblamo, and Kerbammo on a number of stories, which I recalled from the final run of Jerry Lewis at DC a little later. When I compared I found more matches like "Heyyyy" and "Halllp" and so on.

Speaking of Super Heroes, Riefe is yet another writer at late-'60s Dell who I'm pretty sure has nothing to do with that feature.

Posted by Martin OHearn at 1:03 PM