Weisbecker and Riss at the Movies 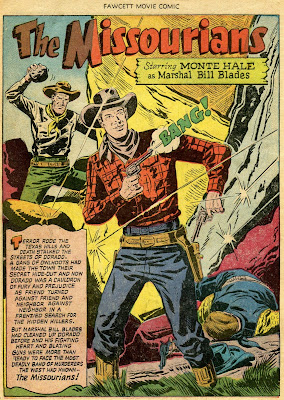 Note the distinctive long, square faces in Fawcett's adaptation of the movie "The Missourians."

Somewhere along the line, Clem Weisbecker and Bob Butts have had some work conflated at early Fifties Fawcett, making it difficult to sort out their stories going by their credits in the Who's Who. I finally took a long look at their credited Forties stories at other companies. I believe I can follow the progression of Clem Weisbecker's style on the Black Hood and such to the Fawcett artist with those distinctive faces.

Butts is given "Copper Canyon" in the Who's Who, which is the main point of confusion here, but the actual penciller is Weisbecker. The style matches that on Jackie Robinson at Fawcett at the same time, which the WW gives to Weisbecker and not Butts.

The other problem with "Copper Canyon" is that it's also been attributed entirely to Sheldon Moldoff. I can accept that Moldoff inked it. "Pioneer Marshall" and "The Missourians" are also supposedly entirely by Moldoff, but the inking on those two doesn't overwhelm the Weisbecker pencils.

In many cases on the Fawcett movie adaptations the inker did a lot of the heavy lifting on likenesses. Some didn't. Thus, Pete Riss's issues vary wildly as far as that "overwhelming the pencils" goes; on "Dakota Lil" you have to look twice to find Riss, but on "The Thundering Trail," as seen here, he's easier to spot (although it's been attributed to Stan Campbell).

Posted by Martin OHearn at 1:42 PM