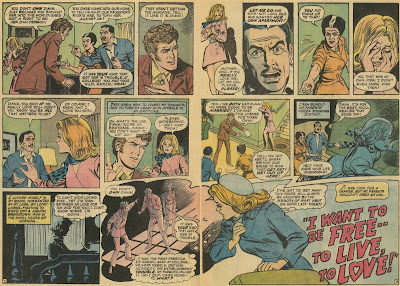 Click it to see the double page at a better size. This is another case of a rather overpowering inker hiding the penciller's style is "I Want to Be Free--to Live, to Love" in DC's Falling in Love 122 (Apr/71). The Grand Comics Database suggests Tony deZuñiga is inking himself. But try to picture the pencils without the distraction of deZuñiga's very distinctive style; this artist usually inked himself through the Sixties. Take a moment to look for the characteristic poses in a number of panels, before going to the second page where I've named him.
I'd already posted on a couple of Kurt Schaffenberger romance stories at DC. The Colletta inks on "Just Too Shy" may be what's led people astray on the penciller, but the GCD doesn't recognize even him there; it gives "?" as the inker. It suggests "Jay Scott Pike?" on pencils, which it has on at least one Werner Roth/Colletta story.