A Trapani Ghost on the Ghost Who Walks, and Writers 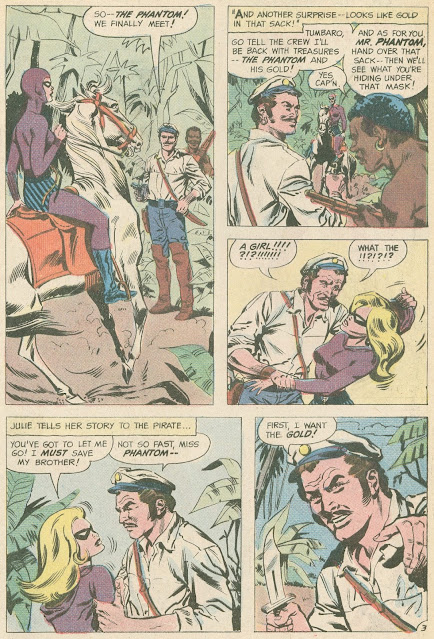 "The Secret of the Golden Ransom" in Charlton's first issue of The Phantom--#30--may or may not have been a ghosting job as far as the editors knew, but it certainly ended up one for fandom, as the pencils as well as the inks have ever since been attributed to Sal Trapani. The penciller is José Delbo, artist on Billy the Kid at Charlton at the time.

The script was evidently passed along out of inventory from King, like Gary Poole's in the same issue and Dick Wood's in the next few. The writer is Pat Fortunato, who wrote the earlier Girl Phantom story, "The Riddle of the Witch," in #24. Note the profusion of exclamation points and question marks in one panel; this would be a noticeable characteristic of Fortunato's work in her credited (and uncredited) work on UFO Flying Saucers at Gold Key.

This post was just going to ID that one Charlton story, but upon seeing how other issues have been attributed on the Grand Comics Database, I ended expanding it by a lot. On the Gold Key issues, the GCD notes that some 40 years after these were published, Bill Harris said he wrote all the Phantom stories. The Comic Reader 40 is cited for attributing the story in #11 as by "Dick Wood?" in addition to "Bill Harris?" That story's note does suggest that actually Harris said he wrote the adaptations of Lee Falk strip stories, which makes more sense. TCR 32 also mentions Wood: "Dick Wood is still scripting SOLAR, and he'll be handling the original PHANTOM scripts." The source of the contemporary Gold Key news at TCR? Gold Key editor Bill Harris.

For your perusal: panels from the Claw story in Daredevil Comics 22 (Feb/46, Lev Gleason), "Interplanetary Olympics" in Jigsaw 2 (Dec/66, Harvey), and "The Terror Tiger" in Phantom 21, all with the use of "Kazar" for "Huzzah"--like "Great suffering Hannah" elsewhere, a sign of Dick Wood's scripting. 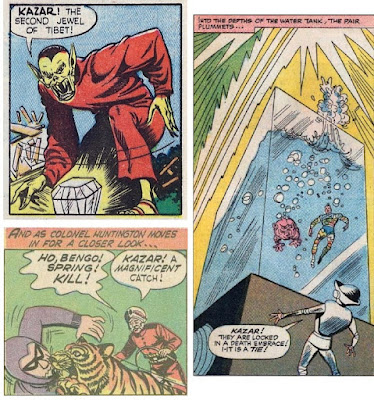 I suppose most of the stories not listed here through #30 are indeed by Bill Harris.


in Mandrake the Magician
King

Posted by Martin OHearn at 9:05 PM