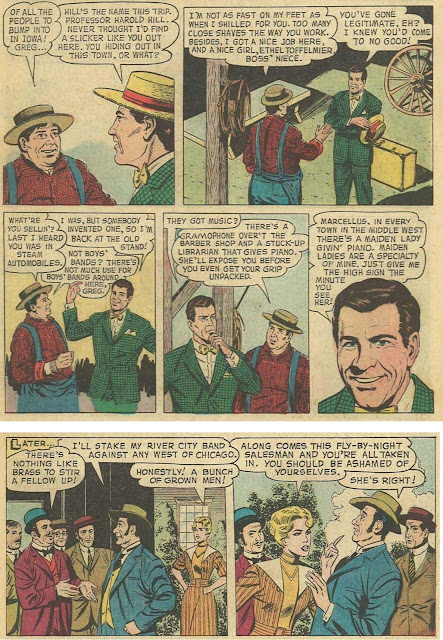 And, yes, on pretty much every other John Forte penciling job that I can think of he inked himself. But here we are. I don't know if this is a tag team of a couple of inkers or just one getting more rushed as the pages pile up, but by the later pages the inking doesn't look much like it does on these two. Those later pages in particular make me think of Frank McLaughlin as a possible suspect.
And the writer is unknown. It may just be because I'm so familiar with the movie of The Music Man, but this strikes me as the one Movie Classic that uses just as much as possible from the movie script verbatim (apart from necessarily condensing and bridging). The other Dell movie adaptations of the period, by Ken Fitch, Don Segall, and yet more unknowns, take a freer hand with the source material.
Posted by Martin OHearn at 2:45 PM