Before I get to my next installment of Twilight Zone writers, I want to devote a post to the art: specifically, the art attributed to Joe Orlando. 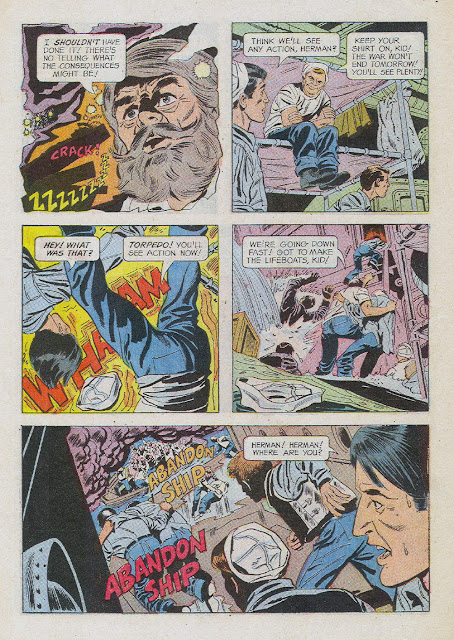 Jerry Grandenetti pencilled "Moment of Decision" in Twilight Zone 15 (May/66).

Joe Orlando didn't. Grandenetti even lettered the sound effects, as was his habit. The page above was inked by Bill Draut, as you can see from the face in the lower right corner. Joe Orlando inked at least some of the story, as here:

Joe Orlando no more pencilled "Moment of Decision" than Bob Kane did. Grandenetti and Draut ghosted for Orlando for a period, just as, say, Lew Sayre Schwartz and then Sheldon Moldoff did for Kane on Batman. Orlando wasn't even signing or taking a credit line here as at DC or Warren; he was trying to fool only the editors (if he accomplished that much). The readers are under no obligation to deny the evidence of Grandenetti's distinctive style.

Jerry Grandenetti, on the other hand, had nothing to do with "The Lost Genius" in TZ 14 (Feb/66); the GCD correctly attributes the pencils to Orlando, although I'd say someone else inked it.
Posted by Martin OHearn at 10:42 AM