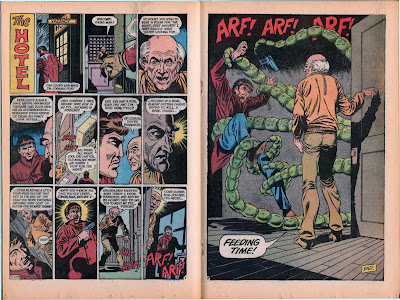 "The Hotel," an uncredited two-page filler, was the cover story in DC's Weird Mystery Tales 4 (Jan-Feb/1973). In the letter column of issue 6, assistant editor E. Nelson Bridwell answered a request for the credits by saying it was written and drawn by Jack Sparling. In number 8 a reader who obviously had seen the writer/artist's work at Marvel corrected that misidentification; the story is by Jim Starlin. Bridwell admited that he'd confused the somewhat-similar names. The moral: take even credits supplied by editors with a grain of salt! The Grand Comics Database notes that it previously attributed the art to Wayne Howard, and I think he could indeed have done the inks. When the GCD art credits were corrected to Starlin, writing credit remained with Sparling, missing the point that his WMT 6 lettercol mention was incorrect—period. 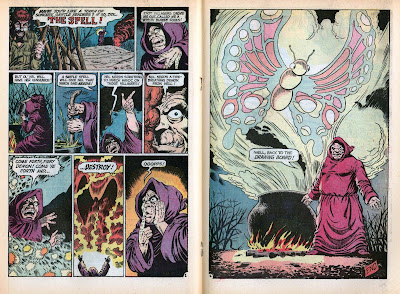 "The Spell" appeared at DC earlier, in House of Mystery 207 (Oct/72). It went uncredited as well. This time no one noticed the artist's style, it being only his second professional story published; he'd just been in Marvel's Journey into Mystery 1 (also dated Oct/72, but Marvel at the time dated most of their comics, like this one, a month ahead of DC). His pencils there were overpowered by Mike Ploog's inks. The GCD has, the last I looked today, credited the inks on "The Spell" to Dan Adkins (which I could see) but the pencils to George Tuska.
Posted by Martin OHearn at 11:20 AM